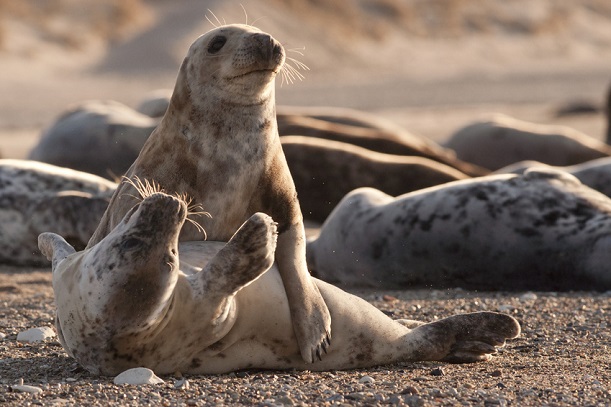 Scientists from the Sea Mammal Research Unit (SMRU) at the University of St Andrews glued marine telemetry tags to the fur of 10 harbour seals, one of two seal species in the UK, around Orkney, off the coast of Scotland.

Readings were taken between April and August, before the tags dropped off after the seals’ annual moult. Data is now being analysed to determine why harbour seal populations have declined by as much as 90 percent since 2000 in areas of northern and eastern Scotland.

The experiment, part of a multi-year study project funded by the Scottish Government, has produced a 3D representation of each animal’s activity.

The SMRU said it had been able to identify the seals’ feeding areas at sea, and where to collect water and food samples to further investigate their decline in Scotland. It has also identified ‘haul-out sites’ the seals use when they rest on land, so they can photograph and assess their breeding status, and fur markings, linked to their survivorship.

“We are keen to break down technological barriers so that government, the scientific community and the private sector can work together in order to ensure we have the best informed policy decisions for the environment,” said Vodafone in a statement.

“Vodafone has a long-history in extending mobile coverage across the world, especially in developing countries and helping the most vulnerable of people, but we also want to go back to our roots in the UK and help protect one of the things our society cherishes – our sea – and the bio-system it supports.”

Vodafone signed the deal at the end of 2015 to investigate how to improve the transmission of data from the sea to land, as part of the project tracking the decline of the species.