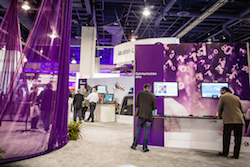 A-L’s enterprise small cell contains a Qualcomm SoC and has been designed to bring better LTE, 3G and Wi-Fi connectivity to offices and other commercial buildings.

According to the vendor, the cell uses software-defined radio to allow operators to configure it for a combination of connectivity technologies, while also letting them reclaim spectrum when transitioning from 3G to 4G networks.

Alcatel-Lucent revealed that Canadian operator Telus will use its new unit to provide coverage inside its offices.

Alex Giosa, President of Alcatel-Lucent Canada, said: “Today’s LTE network is largely built in an outdoor environment, making indoor coverage a challenge depending on the building's proximity to a cell site and the materials of the building, particularly in Canada.

“With the Alcatel-Lucent Enterprise Small Cell, Telus will be able to provide enhanced high-speed LTE and Wi-Fi service to their customers in both indoor and outdoor environments that gives their customers a differentiated wireless experience.”

Speaking during its keynote address at Mobile World Congress, France-based Alcatel-Lucent also announced its Wireless Unified Networks strategy, which aims to combine both cellular and Wi-Fi networks into a single unified offering.

The vendor introduced two new capabilities: Wi-Fi boost, which uses cellular technology to improve the performance of networks, and cellular boost, which leans on unlicensed spectrum to enhance cellular performance.

According to A-L, the combination of technologies allows operators to provide a single network offering to consumers, while subscribers in turn gain a more consistent and higher-quality mobile experience by utilising “the downlink of Wi-Fi with the uplink of cellular”.

By way of example, the vendor claimed Wi-Fi boost had the potential to improve download speeds by 70 percent compared to standalone Wi-Fi at the cell edge.

Mike Schabel, Vice President of Small Cells in Alcatel-Lucent said: “As an industry we have historically treated cellular and Wi-Fi as unique technologies [but] from a consumer perspective, it should simply be just Wireless.

“With Wireless Unified Networks, we are excited to be taking the important steps to transform and greatly enhance the user’s wireless experience in the home, at work, and in dense venue networks by combining existing Wi-Fi and cellular networks into one high performance network.”

The vendor revealed that trials of its Wi-Fi boost and cellular boost technologies will begin during Q2 2015. User devices will require an OS update to take advantage of the capabilities, while software updates will also be required in the networks themselves.

Meanwhile, Alcatel-Lucent also revealed it would be demonstrating its NFV-based virtualised RAN during Mobile World Congress, in partnership with Intel, China Mobile and Telefónica.

The vendor revealed solution will be available for customer trials during 2015, with the aim of launching commercially next year.