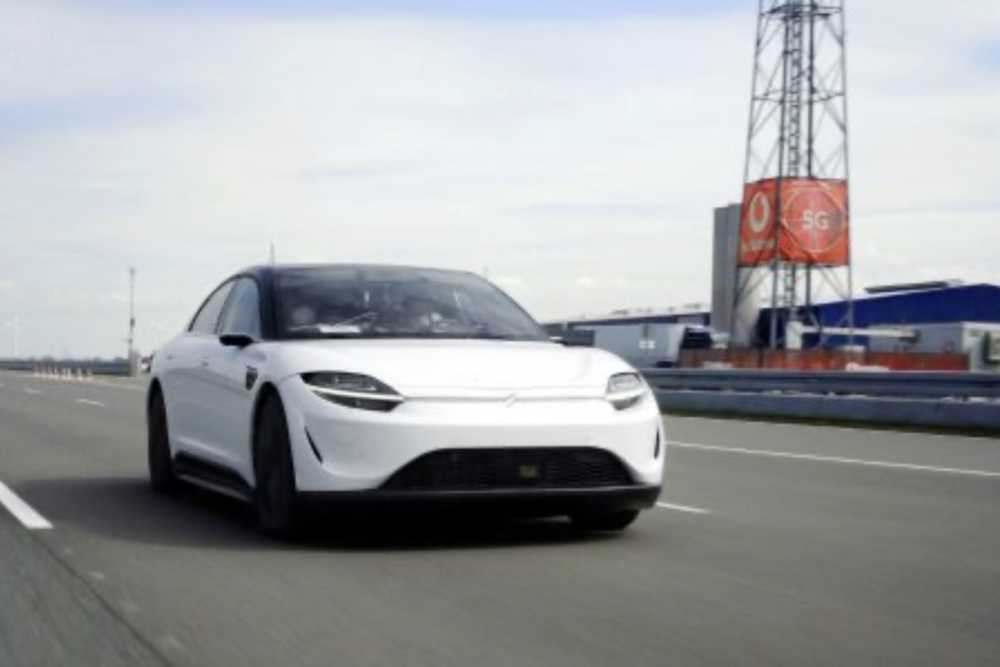 Sony has unveiled its first Vision-S02 concept car and launched a new division to seek entry into the electric vehicle (EV) market.

The Vision-S O2 is Sony’s second EV following the 2020 Vision-S saloon. The new sports utility vehicle was unveiled today at the US Consumer Electronics Show in Las Vegas.

The electronics giant’s existing sensors and entertainment technology could give it an edge over its rivals when building future vehicles. However, the book on sensors and sensibilities is a dramatic work in progress at Vodafone Deutchland’s 5G Mobility Lab in Aldenhoven, deep in Germany’s North Rhine-Westphalia region.

Sony and Vodafone say they are constantly refining the technology that will fuel the autonomous car's decision making - the intelligence fed over 5G networks. The info fuel lines and data carburettors currently need some tinkering.

A prototype of the Vision-S was taken on the first of numerous test drives, in Spring 2021, around Aldenhoven 5G Lab’s test circuit. Vodafone has released details of its progress since then. It claims that the electric car has completed its first driverless circuits without incident.

In another test a remotely controlled Vision-S ran successfully over 5G. The car was steered by a human driver seated more than 9,000 kilometers away in Tokyo, Japan. For the tests the electric car was equipped with a special 5G antenna but a more aesthetically pleasing design may be prepared for consumers.

Currently, the remote control team is concentrating on making the passenger experience secure, delay-free and as simple as possible, says Vodafone. More elaborate interaction with the environment, through apps like augmented reality, will come later.

Vodafone Germany CEO Hannes Ametsreiter argued that when mobile communications become a real-time network, the car becomes a smartphone on wheels. Mobile comms must guarantee instant reactions in order to say in control of the wheel and get passengers safely to their destination, said Ametsreiter.

Are we there yet Sony?

"We are proud that the technical demonstration has been successful," said Izumi Kawanishi, the VP in charge of Sony’s AI robotics business. "Safety is still one of the essential factors, as innovations in the automotive sector are progressing faster and faster. For this reason, stable data communication and control technologies with low latency are becoming increasingly important.”

Vodafone is working to achieve a latency of 10 milliseconds between robotic drivers and cars, which is about equal to human reaction time. While human wits are easily dulled by distraction, robotic reflexes are delayed by data congestion.

Vodafone and Sony say they are currently working to crack the data processing challenge in order to bring down the Vision-S’ latency times and speed up its reaction.

Wait until you see its latency!

To achieve this Vodafone and Sony fine-tuned and recalibrated the interaction of the car’s mobile radio module with the 5G antenna. Though the data exchange between the car and the mobile radio station works the same way that smartphones speak to base stations now, the difference is that the car is sending a lorry load of data, says Vodafone.

When will we reach Automation, Dad?

Once this problem is cracked it will create new services and applications. Cars could receive signals from incoming business travellers and automate the process of picking them up at the airport, according to Vodafone’s release.

Vodafone says more 5G tests will proceed in the 5G Mobility Lab in January as it tests applications under live conditions. Sony wants to use 5G to make software updates of its cars a quick and painless procedure. Once it has smoothed out this process, it can begin rolling out new services and technologies for the car with confidence.

The 5G Mobility Lab can configure all network settings, so that development partners can simulate the mobile network conditions for each country that cars and apps are being designed for.