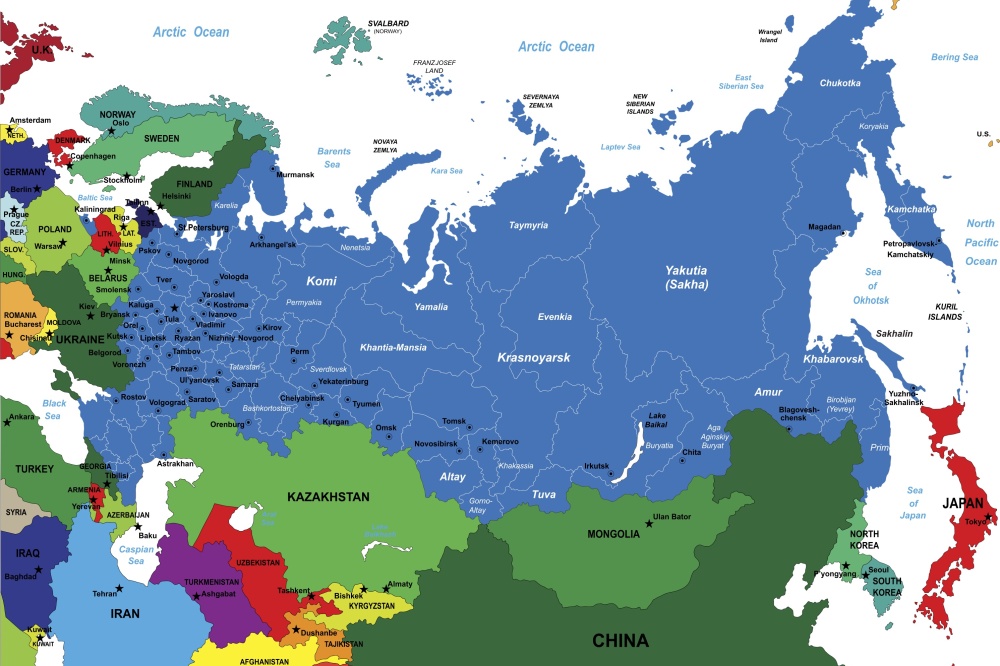 The network will link Frankfurt and Stockholm, go from Vladivostok to Busan, and take in Tokyo and Hong Kong.

Rostelecom which describes itself as "Russia’s largest integrated digital company", has entered into a legally binding parity agreement with VEB Ventures (part of VEB.RF) to acquire a stake in Atlas (or its operating company) to develop a fibre backbone TEA NEXT (for Transit Europe – Asia).

The new line will connect the Russian western and eastern borders with the largest cities and link to Russian borders with Mongolia and China.

The network will also be extended from the country borders with Europe to the main European traffic exchange centers in Frankfurt and Stockholm, and will link Vladivostok to Busan, Tokyo and Hong Kong via underwater communications channels.

Next construction phase begins in 2022

Now the corporate set-up is complete, the construction phase of TEA’s main segment is expected to start in 2022. The project will see Rostelecom and VEB Ventures each invest around RUB 6 billion (€72.39 million) in Atlas at the initial stage, while the strong interest expressed by financial partners signals the potential for external investor groups to join the project.

The total investment is expected to reach around €576 million. The investment to 2025 will be partially through Atlas and the JV fund) plus a syndicated loan facility from VEB.RF. Also other Russian and international banks, some of which have already contractually committed to the project.

By 2025, the operating company plans to launch a set of brand new fiber optic rental services to help Russian and international companies set up communications lines throughout the entire country geography and along the Europe-Asia transit.

Russia’s Deputy Prime Minister, Dmitry Chernyshenko, said that TEA NEXT will be instrumental in shaping the national digital economy and boosting innovation in every sector.

He also comended the joint partnership between Russia’s "two digital leaders" as a brand new business model and highly attractive investment project both in Russia and internationally.

TEA NEXT started in the summer of 2020 when Rostelecom founded the operating company Atlas and commenced the construction of the first segment running from Moscow via Saint-Petersburg through to the Latvian border.

Oleg Teplov, Director General of VEB Ventures, added, “With…the Chinese telecom export alone expected to reach USD 50 billion by 2025, it is critical that we deploy the full potential of Russia’s infrastructure as the key ISP transit point, to be able to accurately forecast the demand and customise our solutions to fulfil it.

"The sustainability impact in the communities and local economies throughout the entire span of TEA NEXT cannot be underestimated. The project will deliver significant social and economic benefits through local job creation, local SME supplier engagement and other economic contributions – effectively from Vladivostok to Saint-Petersburg.

"Moreover, the project design also entails the use of 100% of locally produced equipment, including the fiber optic cable.”

Mikhail Oseevskiy, President of Rostelecom commented, "TEA NEXT will be instrumental in delivering our ambition to become the leader across all segments of the telecom ecosystem. With its technically advanced new generation features, the project will provide the critical foundation for the national backbone fiber optic infrastructure in the next thirty years.

"Atlas, in turn, is set to become the leader in fiber optic services for national companies, as well as the largest international operators and OTT players. The main feature of the project is the brand new advantageous route from West to East of Russia with stations in key cities along the way.”