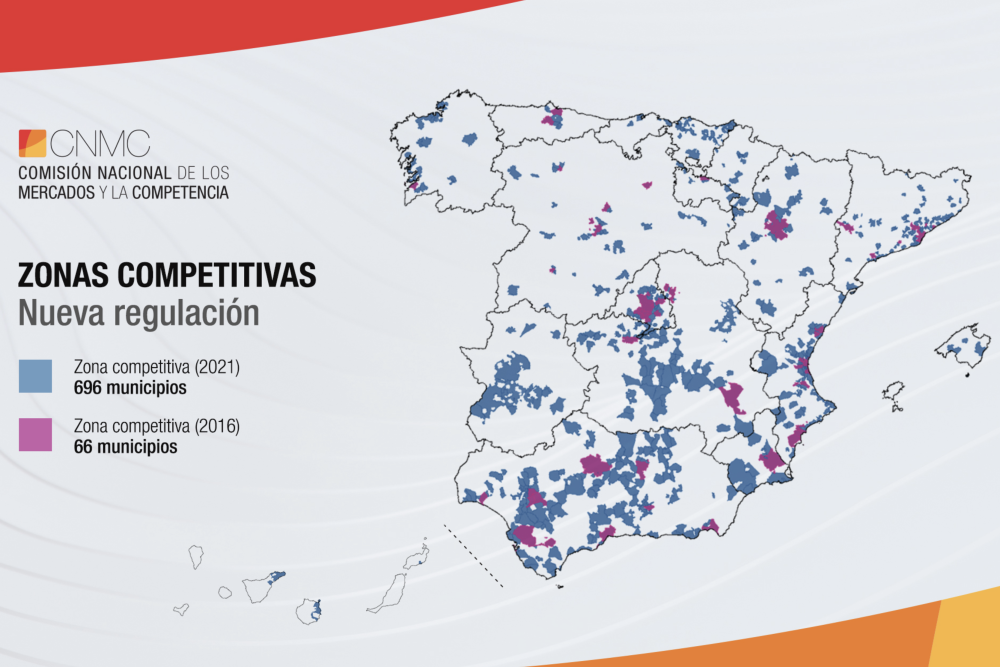 The Spanish regulator, the CNMC, shakes up rules to spur infrastructure competition

Spain’s telecoms regulator, the CNMC, has said the former incumbent Telefónica will no longer be obliged to allow competitors to use its fibre access network in 696 municipalities (see map above). They collectively account for about 70% of the country’s population.

In the remaining municipalities, where there is less competition among operators, Telefónica’s wholesale-access obligations remain in place.

Although this is great news for Telefónica, across Spain largest operator will have to guarantee that other companies access its civil engineering infrastructure such as ducts and poles so they can deploy their own fibre.

The CNMC says that within three years, it will assess whether it needs to review the zones currently considered "non-competitive" or withdraw the regulation on wholesale access to the fibre network throughout the Spain.

The CNMC has approved this “definitive regulation” of the wholesale markets for broadband access (Markets 1/2020 and 3b/2014), seeking a balance between ensuring competition and promoting investment in what it calls next-generation access (NGA) networks, which primarily means fibre.

The new measure updates the 2016 regulation. Since then, the number of FTTH connections in Spain has risen from 3.1 million in 2015 to nearly 12 million in 2020, according to the regulator’s own data.

In 2015, FTTH lines accounted for 23% of the market, but they have become the predominant technology, accounting for about 75% of all broadband connections.

These figures – and those of the FTTH Council Europe – show Spain is a leading European country both in coverage and in penetration of FTTH fibre connections, ahead of the four biggest economies in Europe – France, Germany, Italy and the UK.

In each of these 696 municipalities where the obligation of provide access to Telefónica's fibre has been lifted, it has a less than 50% market share and there are at least three other NGA networks with a minimum coverage of 20%.