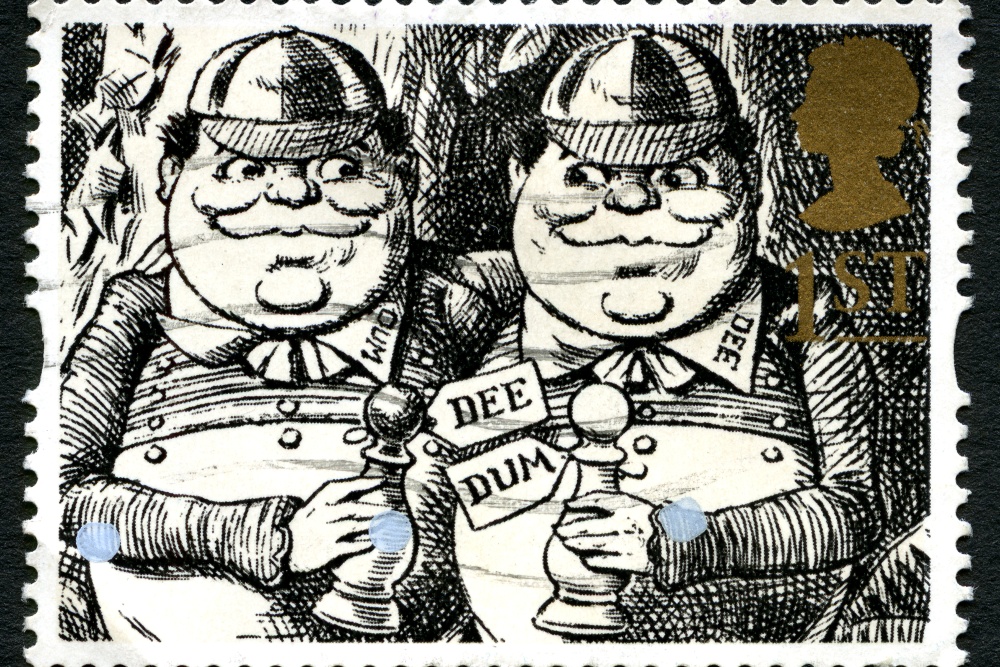 Still the US Supreme Court (which is having a busy time of it) has pulled a white rabbit out of hat in laying out the acute need for the law to catch up with where private and public are hard to tell apart – like Tweedledee and Tweedledum (shown on British postage stamp).

US Supreme Court judge, Justice Clarence Thomas, has called out the contradictions inherent in the legal status of social networks. He vacated (cancelled) a 2019 appeals-court ruling that found the then-President Donald Trump had violated the First Amendment by blocking people from interacting with his account on Twitter.

The First Amendment of the US forbids government to limit the right to free speech.

Justice Thomas declared the case "moot" as Trump is no longer president – and Twitter shut down his account.

The judge highlighted the contradictions in the case. On the one hand, the President was arguing that Twitter is a protected public channel and should have its legal status, as defined under Section 230, changed. But if were to be redefined as a public channel, then it would be bound by the First Amendment.

Section 230 is part of the Communications Decency Act 1996 whose purpose is to protect the owners of any “interactive computer service” from liability for anything posted by third parties. It was thought this protection was necessary to foster new kinds of communications and services in the era that the internet became mainstream.

Arguably at that point, the extraordinary power and reach of the most successful social networks could not be foreseen, nor their part in fuelling conspiracy theories (QAnon, anyone? and now the Big Lie – how Trump's election victory was stolen), interference in the national elections by foreign states (cf US election and Russia) and interference in the Brexit vote (Facebook).Or Facebook allowing half a billion people's personal details to be exposed to hackers.

This means that while the then President couldn’t block people from engaging with him on Twitter due to the First Amendment, under Section 230, Twitter had the right to shut down his account completely.

This is because the Act includes a provision that if a social network acts in “good faith,” it can remove content that is offensive or otherwise objectionable.

He acknowledged that social networks provide channels for unprecedented levels of communication, including by “government actors”, and expressed concern that the control of those channels is in a few private hands which are not subject to the First Amendment.

Judge Thomas asked whether social networks should be viewed as “common carriers” – which is how telcos are categorised and regulated – which would curtail their right to exclude, among other things.

The Judge has clearly flagged that appropriate legislation is needed to protect public interest on these highly public, privately-owned platforms and escape the illogicalities of the looking-glass world.

Certainly the Biden Administration has signalled that it intends to tackle a number of issues around Big Tech, although for somewhat different reasons that the Trump presidency's rather more personal war with various platforms.