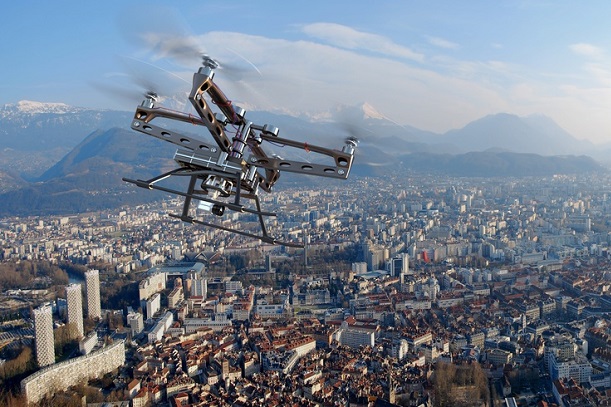 Vodafone has demonstrated how LTE could be used to track and control long distance drone flights, amid European Commission hopes the technology could boost the continent's economy.

The trial, which was first announced at Mobile World Congress this year, used 4G modems and SIMs attached to a drone. A self-learning AI system determines the position of a drone and notifies authorities if it has flown off course.

The demo, which was held in Aldenhoven in Germany, showed how LTE could track drone flights at up to 120 metres above the ground. Conventional radar does not support vehicles of this size.

Vodafone said the breakthrough was showing how two drones flying close to one another could be identified and managed separately. It claimed this could be carried out en masse in future and serve a similar service to transponders on aircraft.

The UK operator said its Radio Positioning Service could also be used as a back-up for traditional GPS, which it claimed was easier to spoof or disable.

The LTE network also streamed 1080p video and transferred images at speeds of more than 9MBps.

Vodafone Group Chief Technology Officer, Johan Wibergh, said:  “This important trial has shown the capability for mobile networks to help to implement a regulatory framework and enable the creation of a substantial drone services economy in Europe.

"In addition, we have learned a lot about how Vodafone’s mobile network and technology can support businesses seeking to introduce innovative new drone services.”

The demonstration was attended by representatives of the European Commission and European Aviation Safety Agency. The former has said the drone industry could contribute more than €15 billion to the European economy each year by 2050, by helping with the delivery of small packages, tracking critical assets and assisting during hazards.

Yves Morier, Principal Advisor to the Flight Standards Director, EASA, said: “Operator trials such as this one are helpful in developing the regulatory framework that will enable beyond line of sight drone flights in Europe and the creation of a valuable new area of economic activity.”

Further trials will involve geofencing, where drones can be blocked from entering no-fly zones, and setting different levels of tracking drones and their flight plans, Vodafone said. It added it would also explore the potential of 5G for drones.