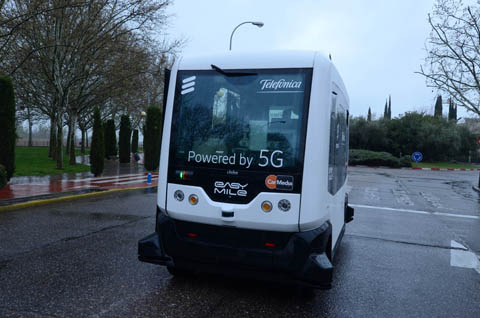 Telefónica has used a 5G network to stream content to an autonomous vehicle.

Using the 3.5GHz band, the vehicle was also able to send telemetry data back to the network to enable real-time control.

Telefónica has estimated that there will be approximately 10 million autonomous vehicles by 2022.

Javier Gutiérrez, Director of Strategy and Network Development at Telefónica Spain, said: "5G technology has much to contribute in the field of the connected vehicle.

“In addition to the download of multimedia content, autonomous vehicles generate up to 4TB of daily information from the information collected by the sensors, meaning that a high bandwidth is necessary for transferring this data in real time to the network’s edge and also an extremely low latency.

“[This is] all in order to jointly process the data received by the vehicles of a certain area and to proceed with decision making, thus increasing the security in vehicular environments.”

Jorge Navais, Commercial Director for the Telefónica account at Ericsson, said: “By 2023, 20 percent of the world’s population will have 5G coverage. It will have an enormous impact in terms of user experience and the digital transformation of industries and cities.

“With this demonstration, we take a look at the future and how 5G will enable autonomous driving, only one example among many possibilities. It also poises Ericsson and Telefonica at the forefront of Spain’s journey towards 5G.”

The trial was part of the 5G Technological Cities project, which between now and 2020 will see Telefónica working with Nokia and Ericsson to establish testbeds in the cities of Segovia and Talavera de la Reina.

This week also saw member states of the European Union agreeing to launch new testing corridors for 5G. These areas will allow connected vehicles to be tested on motorways which straddle the borders between two or more countries.

Spain and Portugal agreed to launch one corridor between Vigo and Porto and between Evora and Mérida. Bulgaria, Greece and Serbia are also working on a corridor between Thessaloniki, Sofia and Belgrade while Italy is developing a corridor on the Brenner pass motorway.