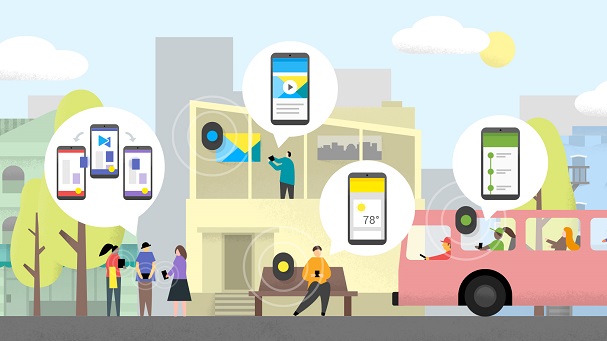 The company has launched Eddystone, a cross-platform format capable of supporting any BLE-supporting operating system, alongside new APIs allowing developers to create Android and iOS apps with beacon functionality.

Google said Eddystone, its home-bred rival to Apple’s iBeacon technology, allows manufacturers to support multiple mobile platforms with a single piece of hardware. Existing BLE beacons can be made compatible with a firmware update and the company said it is already working with manufacturers to build Eddystone-compliant beacons.

Developer tools include the Nearby API, which allows apps to find and communicate with nearby devices and beacons for contextual services. Meanwhile, the Proximity Beacon API lets developers tie location and related data with beacons, which is then stored in the cloud.

Google revealed that Google Now will shortly be able to use this contextual information to help prioritise relevant information cards, such as displaying menu items to users when they are inside a restaurant.

The company has also introduced a fleet management tool that allows beacon deployers to monitor units’ battery health and placement.

In a blog post, Chandu Thota, Engineering Director and Matthew Kulick, Product Manager, said: “Beacons are an important way to deliver better experiences for users of your apps, whether you choose to use Eddystone with your own products and services or as part of a broader Google solution like the Places API or Nearby API.

“The ecosystem of app developers and beacon manufacturers is important in pushing these technologies forward”.

Earlier this month, the technology was installed on 500 buses in the UK capital by advertising company Exertion and mobile marketing specialist Proxama, in order to send targeted in-app messages to passengers.

Google also has a new payments system and IoT platform in the works.