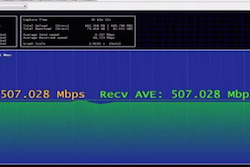 Finnish data operator Ukko Networks has hit speeds of more than 507Mbps during a TDD LTE-A trial held at their Helsinki Labs with Huawei.

Ukko offers data services to a largely business-oriented customer base, comprising field and home workers, the transport and public sectors.

The China-based vendor said the speeds, which were hit using 2x20MHz chunks of 2.6GHz spectrum, represented a high for Europe. As well as the throughput demo, a video surveillance service was also demonstrated.

Huawei worked with the Finnish operator last year to launch the world's first LTE network on refarmed 450MHz spectrum. The network had 99.98 percent population coverage within five months of launching.

Ukko said it now plans to use its 50MHz LTE TDD frequency on the 2.6GHz band to bolster its existing spectrum. It plans to roll out carrier aggregation and technology like 4x4 MIMO to its customers in the coming months.

Antti Pellinen, CEO of Ukko Networks, said: "Ukko Networks is clearly in a great position in the Finnish mobile market landscape, especially from a frequency resources point of view.

"After launching the best coverage network using LTE 450MHz technology, we will launch the LTE TDD 2.6GHz network, which aims to be the fastest network in Europe. It gives us high capacity and new added-value for this frequency in the use of mobile data."