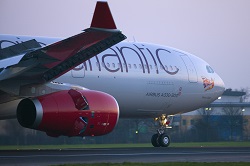 Gogo claimed its connectivity services on transatlantic flights can offer speeds up to 70Mbps. Previously, in-flight Wi-Fi has only been available to domestic flights inside of North America. However, the new partnership will see all of Virgin Atlantic’s existing fleet of aircraft equipped with the new technology.

Reuben Arnold, Brand and Customer Engagement Director at Virgin Atlantic, said: “We’re always looking at ways to enhance the on board experience for our customers and expanding in-flight connectivity across our fleet is just one of the ways in which we are doing this.”

Gogo said its in-flight connectivity services are already used on over 2,000 commercial aircraft on more than 10 major airlines. Virgin is the first European airliner to partner with the company.

The companies have agreed on principal terms and are now working on finalising a definitive agreement.

Earlier this year, Gogo announced it was deploying Ku-band satellite antennas onto Japan Airlines' fleet. The airline will test the technology in 2015.

The vendor said 2Ku antennas are twice as spectrally efficient as others used by airlines. The antennas are only 4.5 inches tall, which Gogo said would reduce drag on planes.

Meanwhile, mobile satellite operator Inmarsat announced in June that it too was aiming to bring in-flight Wi-Fi to 28 EU members states by 2016.