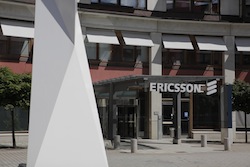 Ericsson has demonstrated new technology that it said improves data transfer rates and will become "a key enabler" for 5G.

The Elastic Cell technology was tested with SK Telecom and follows a deal between the two companies earlier this month to collaborate on developing 5G products and services.

Elastic Cell works by allowing multiple cells near a handset to work together for every transmission made, compared to existing technology, where one device only deals with one cell. The group of cells can improve network quality at the cell edge, as well as omitting cells that could potentially interfere with the transmission.

Both companies claimed Elastic Cell can improve the quality of transmission because it prevents any possible drop in quality when a handset hands off from one cell to another. They claimed that it can improve data transfer rates by up to 50 percent at the cell edge, compared to an existing LTE network.

It is hoped Elastic Cell will be commercially launched by 2016. SK Telecom said it would continue to work with the technology as it moves to provide 1GBps data throughput across its entire network.

The operator said high data throughput demands were a central plank of what the METIS project and the 5G Forum were exploring in their research of next generation technology.

Park Jin-hyo, Senior Vice President and Head of Network Technology R&D Centre at SK Telecom, commented: “SK Telecom, together with Ericsson, succeeded in the world's first demonstration of Elastic Cell which is expected to become a prerequisite for the next generation network.  We will continue to take the lead in developing a variety of technologies necessary to evolve cells.”

Thomas Norén, Vice President and Head of Product Area Radio, Ericsson added: “With this new technology SK Telecom takes an important step toward the next generation of mobile networks. Consumers will benefit from the improved seamless experience wherever they are in the cell and while on the move.”