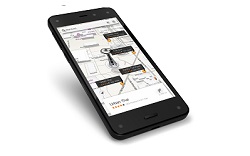 Amazon is targeting developers for the two new features of its Fire smartphone, the Dynamic Perspective navigation function and the Firefly discovery tool.

The smartphone was revealed by the internet retailer on Wednesday and follows its Kindle range of e-readers and Kindle Fire tablet.

Like Kindle Fire, the Fire smartphone is based on the Android OS and Amazon is touting two key features to distinguish it from other high-end smartphones.

The first is Dynamic Perspective, which uses four front-facing cameras and infrared LEDs, a dedicated custom processor and a graphics rendering engine.

Amazon said the feature can allow customers to auto-scroll through text, navigate by tilting or swivelling, or peek at content.

Consumers are able to receive real-time updates on the home screen and access email, most visited websites as well as return missed calls, for example.

The USA Today newspaper has used Dynamic Perspective to display relevant headlines to the smartphone's Home screen and help consumers navigate quickly to related content by tilting the device.

Analysts were sceptical. Bengt Nordström, CEO of the Northstream consultancy, commented: “Although interesting, I find it very hard to believe that Dynamic Perspective could trump the more experienced market leaders.

“The Amazon Fire enables a user to scroll through a webpage, or open menus, by tilting the device in their hand. A solid feature to have, but this sort of technology is not new to the market.”

The second key feature is Firefly, a dedicated button on the device that allows consumers to identify web and email addresses, phone numbers, QR and bar codes, in addition to items such as movies and TV episodes.

Nordström commented: “Firefly may be an interesting feature for many, but it’s more interesting for Amazon as it has the potential to unlock another route for consumers to buy goods through its own channel.”

Ticket company StubHub is using Firefly to help consumers identify songs and buy tickets if the artist is playing in their area.

The handset runs on a Qualcomm Snapdragon 2.2GHz processor and 2GB of RAM, has a 4.7-inch screen and is compatible with nine LTE bands.

Among the other features are ASAP (Advanced Streaming and Prediction), which predicts which movies and TV shows a consumer may want to watch next and cues them to the device for immediate playback.

A Second Screen feature allows users to broadcast TV shows and movies from the smartphone onto a Fire TV, PlayStation or any other Miracast-enabled device.

Ian Freed, Vice President, Amazon Fire phone, said: "The underlying technologies for Dynamic Perspective and Firefly are sophisticated, but we’ve made it simple for developers to harness their capabilities.

“Developing for Fire is easy—developers can mix and match APIs from the Dynamic Perspective and Firefly SDKs with standard Android APIs. We can’t wait to see what developers are going to do with these new, exciting technologies.”

Amazon CEO and founder Jeff Bezos added: "The most powerful inventions are the ones that empower others to unleash their creativity—that’s why today we are launching the Dynamic Perspective SDK and the Firefly SDK—we can’t wait to see how developers surprise us.”

The handset is currently available to US customers only, although it is likely the device will come to other markets in months to come.

Independent analyst Richard Windsor concluded: "Amazon is continuing to make the mistake of releasing the smartphone before its ecosystem is ready to make it compelling."