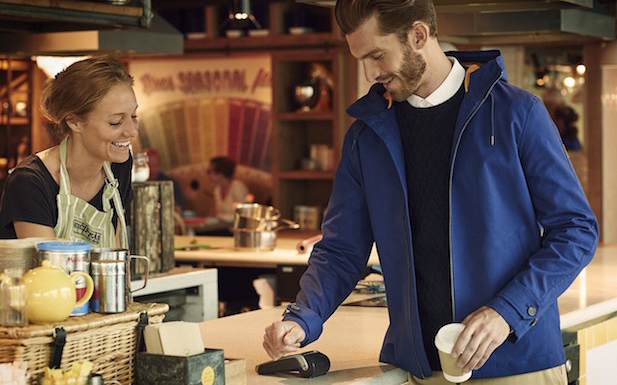 Silly season stretched into the first week of September this year, as a number of questionable IoT-inspired ideas made the news and raised an eyebrow or two at the Mobile Europe office this week.

As reported in Wired, Barclaycard has paired up with Scottish clothing brand Lyle & Scott to develop a winter coat with the bank’s contactless payment card chip sewn into the sleeve cuff.

This means wearers can top up their coats with cash and hold their wrist over contactless terminals to make payments of up to £30, because taking out a payment card (or even a mobile phone) is clearly too difficult to do in this day and age.

The chip can be linked to any Visa or MasterCard debit/credit card, though presumably the wearer will have to replace the chip - or otherwise the entire coat - after two years, because that’s how long Barclaycard’s bPay chips are valid for. Meanwhile, the jacket itself will set buyers back a cool £150 (approximately €205).

Deutsche Telekom also got busy with connecting things this week, although arguably with a bit more practicality behind it.

For those of us yearning for a domesticated smart home bliss, the operator revealed at IFA 2015 that it’s working with home appliance manufacturer Miele to develop a washing machine equipped with a “connected detergent dosing system”.

To take the hassle out of pouring washing power into the unit by hand (or liquid, depending on users’ own preference of cleaning substances), Miele’s Deutsche-powered washing machine contains cartridges containing metered doses of detergent. When these run low, the unit sends a message to the user’s smartphone via Wi-Fi to let them know and connects them to an online store were they can order more.

Fresh from unveiling a smart e-bike, DT is also connecting things with a little more horsepower.

The operator has teamed up with electric scooter specialist Kumpan to develop a new M2M battery pack. The power unit contains a communications unit with a DT SIM card, which can provide info on charge status, scooter location (in case of theft) as well as give a heads-up when the scooter is due for maintenance.

As if there weren’t already an insufferable number of pet pictures dominating social media, a new startup project on Indiegogo promises to make the internet an even more infuriating place to be.

PetBot is essentially a pet-monitoring device that allows paranoid owners to watch their pet via a live video feed. The box, which can capture “selfies” of pets whenever they’re in-shot, also allows owners to record commands into the device, which can then be played to the animals to make them perform tricks when the owner is out of the house (presumably to their amusement as watch via live video stream). Owners can remotely dispense treats from PetBot if their pet obeys.

PetBot also features “built in petificial intelligence” that notifies the owners “when something is happening with your pet” – possibly choking on the treat you just remotely dispensed for them.