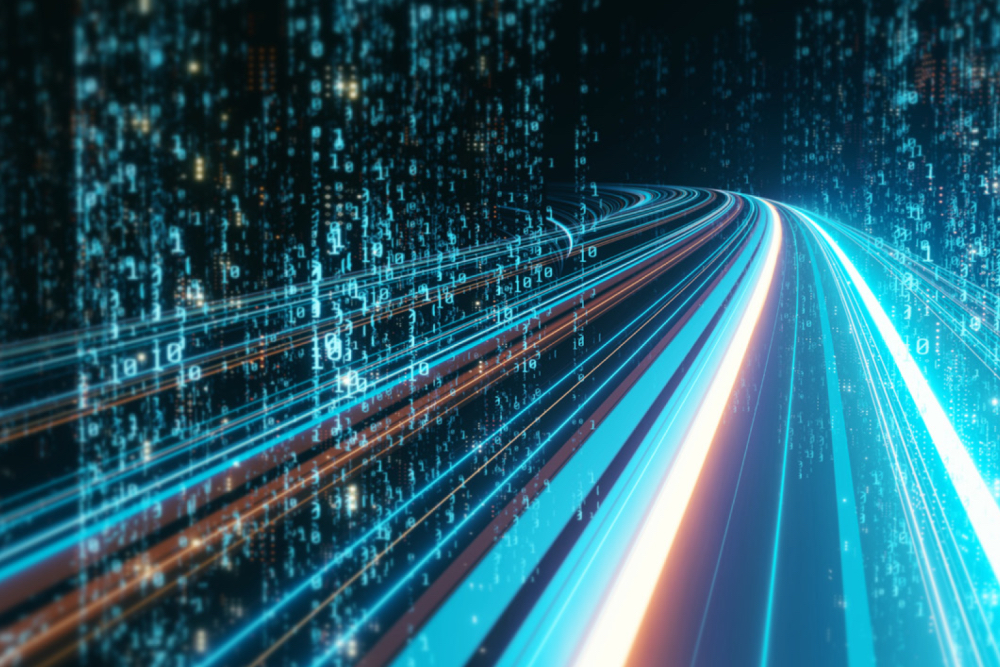 Without significant modernisation of networks, including adoption of cloud, automation and AI, and edge computing, mobile operators will not be able to deliver the advanced 5G services enterprises want. In addition, they have a short window of opportunity to create private mobile network strategies or risk being disintermediated.

In February we surveyed 103 readers, more than half of them working for network operators or systems integrators and consultants supporting them, and the remainder employed by hardware and software suppliers serving operators (for full details, see end of article).

In every survey we ask about the top priorities for the coming year and, unsurprisingly, mobile 5G has topped the list again this time, well ahead of all other priorities. Figure 1 below shows the percentage of respondents who put each priority in their top three choices. 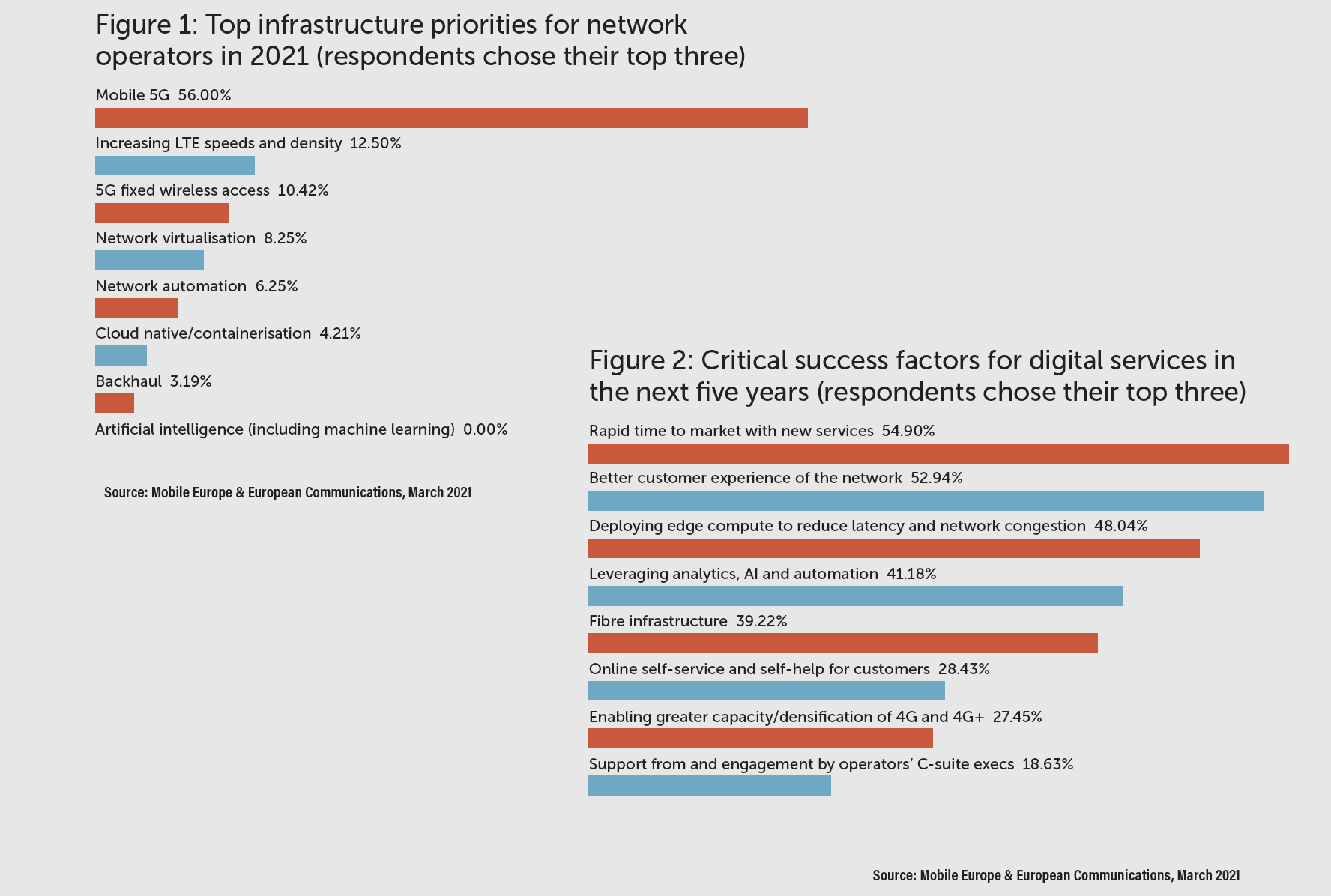 We did not distinguish between 5G radio access network (RAN) or core in the question – it’s very early days for Standalone 5G – although some operators have said they will begin deploying 5G core networks this year. T-Mobile took an early lead when it announced in August the launch of a commercial, nationwide standalone 5G architecture in the US, using its 600 MHz spectrum, and as we went to press its parent, Deutsche Telekom, announced a breakthrough in Germany with an all-5G video call.

Deploying a software-based 5G core is critical because it enables many of 5G’s most promising features, such as ultra-low latency and network slices, to accommodate many different applications with widely varying demands for latency, coverage, availability and reliability.

Deployment of edge facilities, migration of network and support system components to the cloud, and automation through machine learning and other kinds of AI go hand in hand with 5G core networks. It is interesting to note that while these efforts make up the lowest priorities for 2021, when we asked about critical success factors for digital services in the next five years, they ranked higher (see below).

Regarding 5G access, we asked respondents about their plans to deploy Open RAN technology in the next five years. About a third are either already trialling it or plan to begin rolling it out this year, as shown in Figure 2 (above), with another 40% planning to adopt Open RANs in the future.

The idea behind Open RANs is to give mobile operators a lot more flexibility by allowing them to mix and match RAN components that operate on commercial-off-the-shelf hardware. Operators, their suppliers, and others are collaborating on standards to enable this. Japan’s Rakuten Mobile, for example, has committed to using Open RAN throughout its new 5G network and is a member of the O-RAN Alliance, which is working on use cases and defining interfaces.

As Colin Thomson, Practice Lead at Access Partnership, a policy consultancy, notes in a recent Mobile Europe & European Communications blog, geopolitics is behind the move to embrace open interfaces. “OpenRAN has been boosted by the geopolitical situation and commercial requirements, with tensions between Washington and Beijing crystallised around 5G,” he writes. “It was already considered strategic infrastructure, but the Covid-19 pandemic has made 5G paramount for Washington, which has pursued an aggressive strategy of sanctions and diplomatic pressure.”

Thomson adds that US sanctions against Huawei had a ripple effect in the UK and Europe: “The EU, driven by its own ‘technological sovereignty’ agenda, sees a need to preserve European leadership in 5G and beyond – or risk being overtaken by Chinese and American firms.”

Our survey shows that the top critical success factor for digital services in the next five years is being able to get to market quickly with new services – see Figure 2 above. This is no surprise at all as for years operators have been lamenting that it takes them 12 to 18 months to deliver new services, while digital native companies deploy them in hours and sometimes minutes.

Reducing time to market is a major motivation for network and IT transformation. Many operators are adopting network virtualisation, cloud architectures and application programming interfaces (APIs) to expose assets in platform business models. Some envision using network as a service (NaaS), combined with network slicing in 5G networks, to increase service innovation and enable self-service, digital experiences for customers. This is the approach Vodafone Group is taking with its Technology 2025 strategy (see blue text below).

Modernising telcos’ culture, as Vodafone’s Valero and Petty explain, will be key to transformation success, so it is encouraging to see that more than half of survey respondents report (see Figure 4 below) that their companies or their customers’ companies are adopting Agile methodologies and DevOps practices, which include continuous integration, delivery and testing. As Valero notes, these approaches are necessary to speed delivery of services and react to changes in markets more quickly.

However, nearly a fifth of respondents said CSPs’ culture is not changing and some of the commentary we received is telling. One respondent notes his company is being dragged “kicking and screaming” to embrace software and Agile practices, while another said that change is happening, but much too slowly.

Only about a third of respondents said CSPs are hiring AI experts and software developers, although these skills are essential to increasing automation in networks and operations.

For most of our readers, network automation is not a top priority for this year (only 28% ranked it in their top three). It will, however, become ever more important, because manual processes will not be able to handle the volume and velocity of changes required in advanced 5G networks.

Appledore Research believes it is possible for automation to reduce the cost of many network operations by up to 99% and that service demand intervals can decrease by a similar percentage, going from weeks to minutes. The research firm notes that public cloud providers that have already adopted automation as a “sea change” pose a serious threat to CSPs. 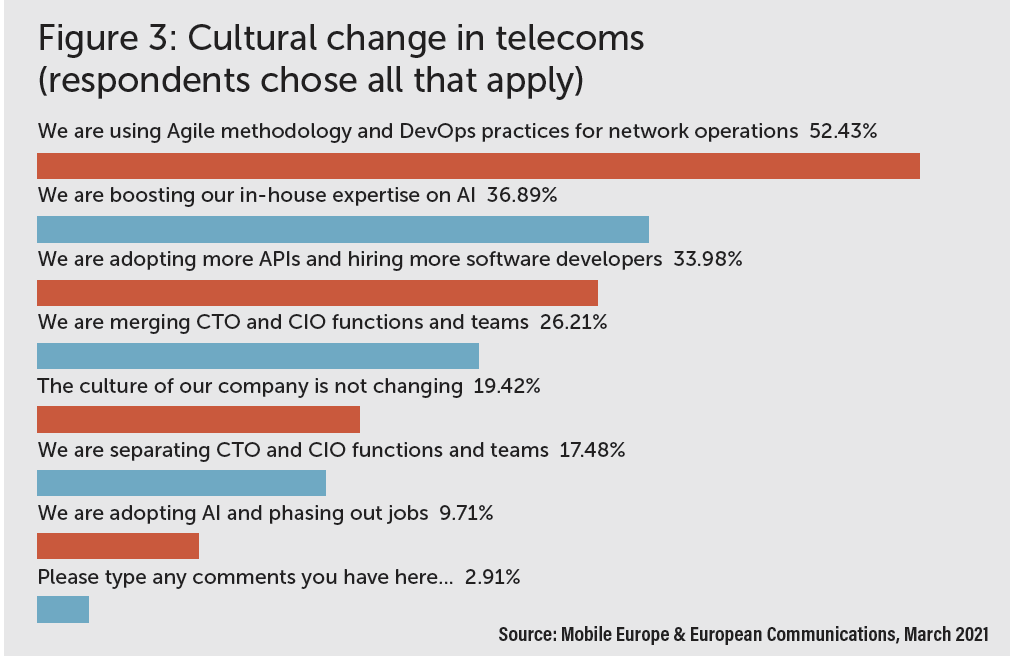 We asked readers whether they view hyperscale cloud providers as a competitive threat or potential partners – see Figure 4 below. The results illustrate the complex and paradoxical relationships between CSPs and companies like Amazon Web Services (AWS), Google Cloud and Microsoft Azure.

While a full 82.5% see them as partners, a majority also see them as competitors. In commentary, some respondents noted that their companies are still trying to decide which approach to take, explaining that they will decide based on requests from enterprise customers and actual use cases.

Many CSPs also believe they will need to rely on cloud providers to deploy multi-access edge computing (MEC), which is how operators will guarantee ultra-low latency in their networks. 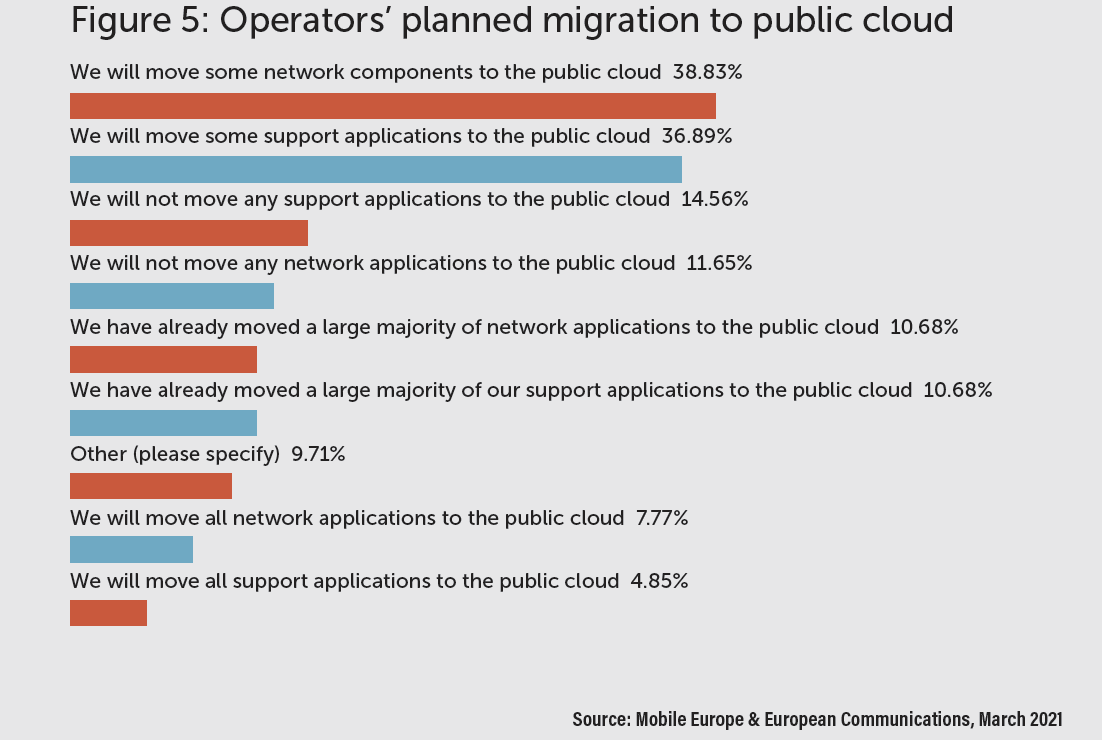 While a significant percentage of respondents said they don’t know yet how they will deploy edge capabilities, almost 40%  (see Figure 6 below) intend to partner with a hosting company.

Our 2020 5G reader survey explained that for the first time, next-gen mobile technology is likely to benefit enterprise customers more than consumers. In that survey, readers chose smart cities and factory automation as the top verticals for 5G, which is the case this time as well – see Figure 7 below.

Digital healthcare has moved up the list this time to the number three spot, which is not surprising given the attention Covid-19 is bringing to the sector. Many operators around the world are involved in 5G trials and proofs of concept with hospitals and other healthcare partners.

For example, Orange recently announced a joint venture with Sanofi, a biopharmaceutical company, consultancy Capgemini and Generali, one of the main insurers in France, to pool technologies, expertise and data for implementation of digital solutions that improve the quality, security, accessibility and productivity of healthcare.

In Germany, Vodafone Germany and Deutsche Telekom have each built campus 5G networks in partnership with university hospitals. The Vodafone deployment is a public-private model, while Deutsche Telekom is extending its public cellular network to the campus. 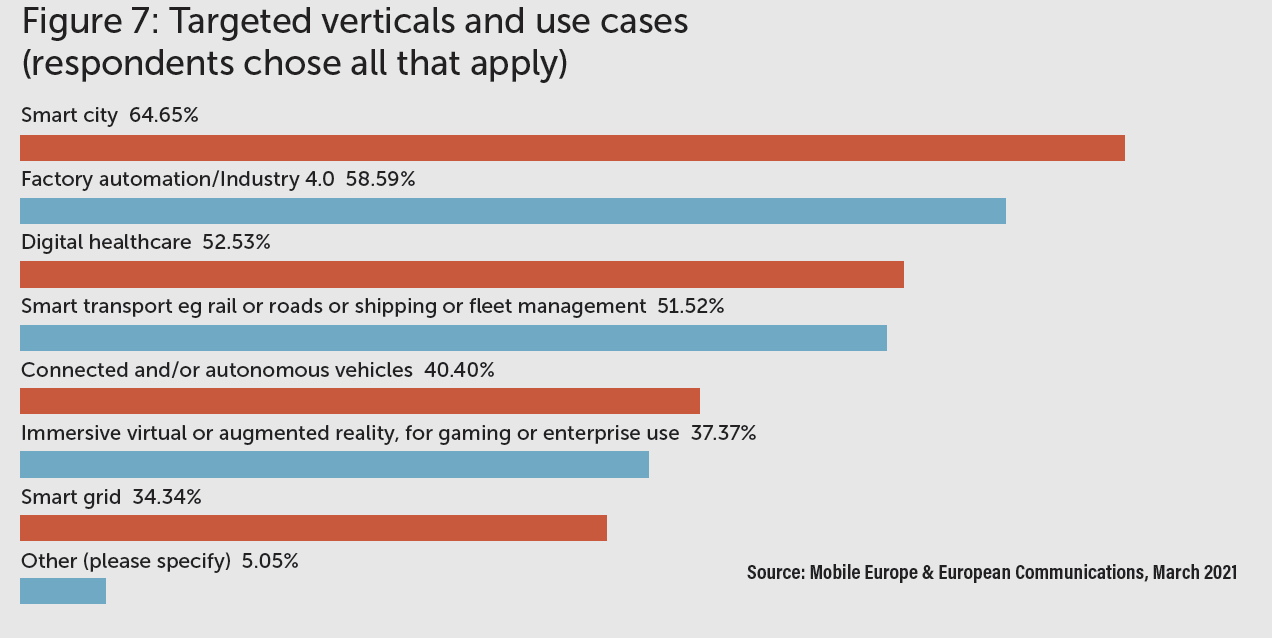 Getting into the private game

Recent research from Bearingpoint//Beyond and Omdia finds that only about 20% of early private mobile network deployments are being led by mobile operators. Hardware suppliers and systems integrators lead about 40% of the time, while the enterprises themselves lead a third of the time.

Says Bearingpoint//Beyond’s CEO, Angus Ward, in a press statement about the research, “Only one in five early enterprise 5G deals are CSP-led, proving that the way CSPs want to sell is at odds with the way in which businesses want to buy. What’s deeply concerning is that some of these early deals, such as the ones we see in automotive, cut out CSPs entirely – even connectivity is being provided by other suppliers.”

He adds, “Businesses want to buy complete solutions that fit their needs and help them solve business problems, rather than individual technology assets. This is a multi-billion-dollar opportunity that CSPs need to address fast and requires CSPs to collaborate with enterprises and [small- and medium-sized businesses] to better understand their reality.”

Mobile Europe & European Communications conducted this survey of readers in February 2021. Of 103 respondents, 44% were network operators, 27% were systems integrators or consultants, 14% were network equipment vendors, 12% were software suppliers and 3% were other types of companies. More than 80% of respondents were from Europe, with the rest divided among Asia-Pacific, the Middle East and Africa, and North America.