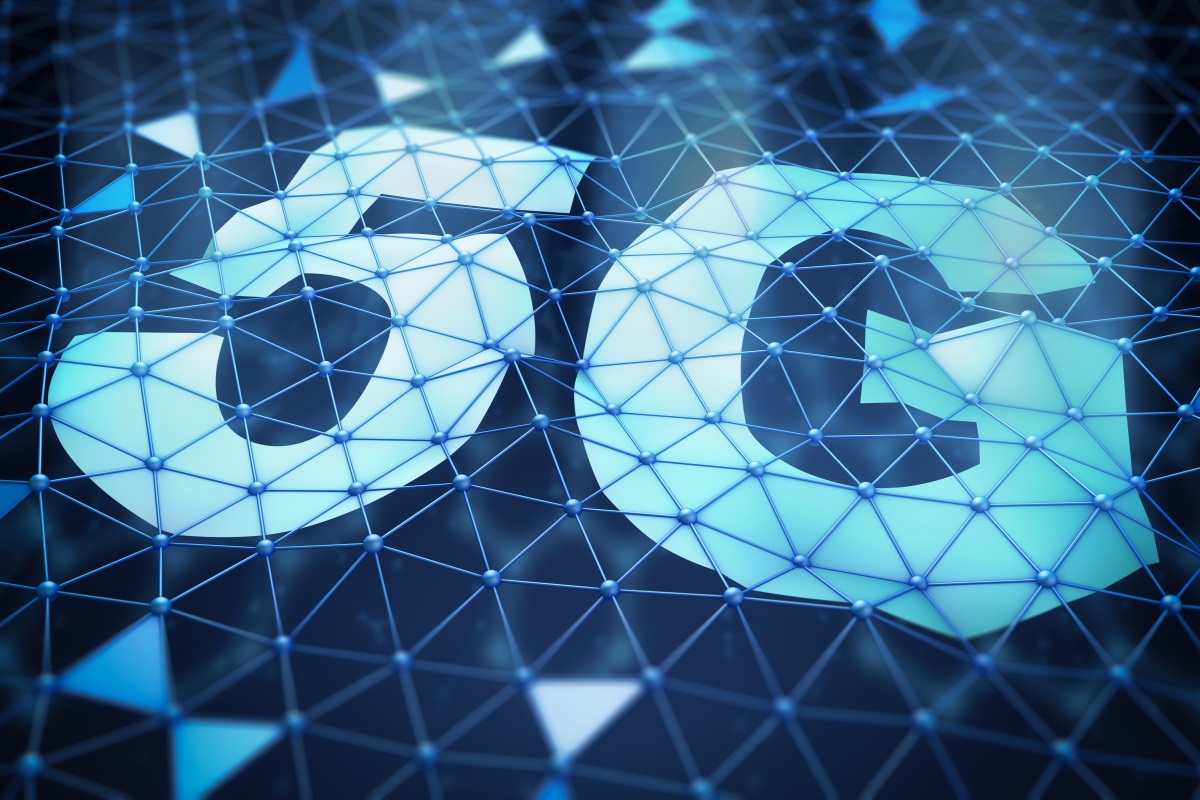 Rethink Research’s new report sheds light on what operators are doing in early 5G deployments and what they need to do to gain new sources of revenue.

The report points out mobile operators’ businesses have so far primarily been built on outdoor coverage – in the era of 2G and 3G people switched to more reliable fixed lines indoors. 4G fed a huge demand for mobile data, and people switched to using their mobiles inside instead of the POTS network.

This, as the new report from Rethink Research, says is when “the outdoor-in model started to creak”. The service within buildings was not good enough for high volumes of high quality data traffic, yet the mobile network operators failed to find a compelling business case to address the problem, with small cells or ‘sub-nets’ indoors.

Now as the era of 5G starts along with the hunt for new sources of revenue, this is an issue as so many use cases are likely to be enterprise-driven and need equally good services inside and outside of buildings.

Indoor challenges aside, early 5G deployments indicate that most of the operators are approaching it in the same way as previous ‘Gs’ when it comes to planning the new networks.

A ‘small cell-first’ approach for 5G's initial stages was much discussed, whereby LTE would continue to deliver wide-area outdoor coverage, supplemented by ‘hot zones’ of greater capacity, many of them within building

This would allow them to augment LTE in a targeted way, support enterprise users and move towards the kind of ‘indoor-out’ model that cable companies have adopted with their Wi-Fi homespots.

It didn’t pan out that way, though as LTE still has a lot of life left in it and can be upgraded and expanded over and over to boost coverage outside.

Also, this is the approach and tech that operators understand the best, and where their skills, experience and expertise lie, including negotiating for sites.

In most cases, they have launched what amounts to ‘4G-plus’ using a 5G New Radio (NR) on the same LTE sites, and using the LTE core for 5G NR’s Non-Standalone (NSA) mode.

This is not true 5G, but it boosts network performance (mainly through new spectrum and antennas supported by NR) and operators' marketing.

Yet this is a temporary solution, which will last only a year for some operators – although five or more for others – before facing the real challenges of a 5G migration.

They are deploying a cloud-native 5G core and a standalone RAN, and extending the network to the main sources of new revenue, which are likely to be people and ‘things’ moving between indoor and outdoor environments.

The wide-area macro network so familiar to operators needs to be as efficient and profitable as possible in this first, simplified 5G phase, and the cost of upgrading and running it in the 2020s needs to be kept as low as possible.

If a mobile operator decides to cede the indoor and enterprise networks to partners, such as private operators or neutral hosts, it will still need an excellent wide-area platform to connect all those players.

It will also need to enhance its core consumer mobile broadband offering. If it decides to deploy enterprise networks itself, then will need its main platform to be super lean and profitable to support that investment.

Rethink Research’s report looks at three ways in which mobile operators are looking to make their 5G macro networks efficient and profitable, and to form a strong base for future expansion into newer topologies and markets.

The focus is not on the impact of virtualisation on the RAN, or of core network developments – it looks at those separately – instead, it surveyed 78 global mobile operators about the most important factors in making their physical RANs cost-effective in the short-to-medium term, which it defines as years one to six of commercial 5G deployments.

The three factors which were most cited in that survey were:

• Leveraging 4G assets, like sites and the core, as much as possible for the 5G launch.

• Planning for increased levels of sharing of assets such as sites, fibre and even active RAN.

• New kinds of base station, notably the ‘mini-macro’, which will improve urban coverage and capacity outdoors. They are increasingly distinct from the ‘small cells’ which will be important indoors.

Figure 1 show the expected level of adoption of these three tactics to prolong the investment in 4G, even as all marketing moves to 5G, and to ease fthe uture migration to full, standalone 5G networks. 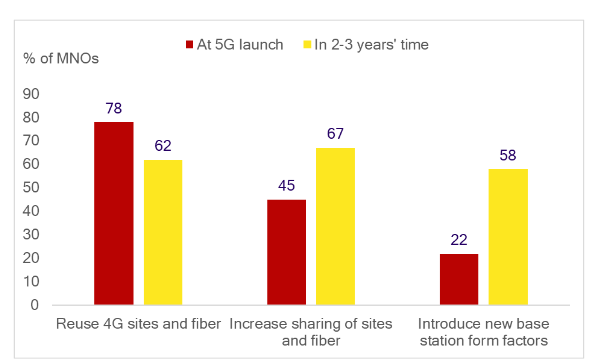 Note: graphs shows the percentage of mobile operators expecting to adopt key tactics for cost-efficiency in 5G outdoor RAN, at launch and in two to three years of launch – 78 of them were asked to name all the tactics which would help to achieve cost-efficient 5G outdoor RAN. These were the three most commonly cited. The MNOs were then asked whether they would adopt these three.

Note also that the report refers to three categories of outdoor base stations –macrocell, microcell and mini-macro. All are subject to a variety of definitions from different organisations, but here a macro site is defined as tower-mounted, a micro site is roof-or pole-mounted, and a mini-macro is a macro-capable base station which can be mounted on street furniture.

The report excludes indoor base stations, and outdoor ‘small cells’ which operate at very low power. In the forecasts, figures refer to radio units, which in conventional architectures, will coexist with the baseband unit and there will be one baseband per cell site, typically at the base of the tower.

In a virtualised or centralised RAN, a number of the radio units could share a baseband unit and several operators could install their radio units on a single cell site.