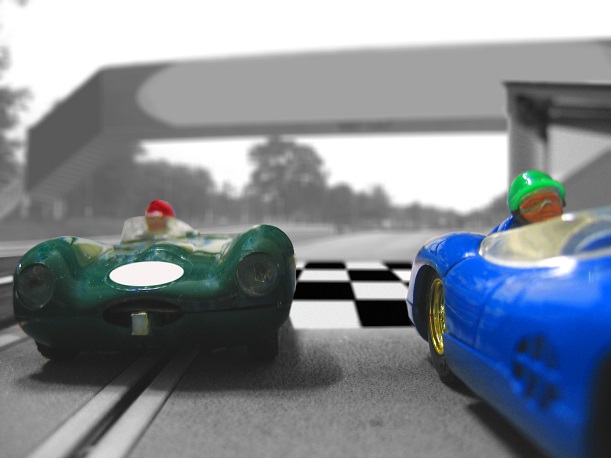 Deutsche Telekom's CTO plans to use recent trials as a way to force united thinking on 5G, even if he has to rely on model cars rather than an Olympic Games or a football World Cup.

The operator held an “experience day” in Berlin last week to show off its recently established 5G testbed.

Users with augmented reality glasses were able to access real-time information related to a toy slot-car race that was taking place nearby, showing how edge computing, low latencies and high data rates can provide new kinds of consumer experiences.

This particular use case is one that surprises Deutsche Telekom Group CTO Bruno Jacobfeuerborn. He says: "Currently head-mounted displays are very bulky and have limited battery life and compute power. If you put [the latter] into the network, addressing this problem, especially of computing power, through an edge cloud is something that makes a difference."

Further use-cases, currently under wraps, are to follow. The operator's Bonn-based product innovation team is working with companies across Silicon Valley, the CTO says, as well as its own hub:raum start-up incubator on what else 5G can power.

Jacobfeuerborn adds: "It's not the number of people we have in our company that's important; it's important we have the right brains and discuss what kinds of partners we need to get things up and running."

The crucial thing for Jacobfeuerborn is taking it from the lab into the real world. An internal test with carefully cultivated conditions is one thing, but true understanding comes from deploying it live with all of the random quirks that that can bring.

Naming some of the questions Deutsche Telekom wanted answered, he says: "For example, what does it mean when you have 3.7GHz, or if you are indoor how do you handover between the New Radio [and LTE carrier], how can you use AR, is it stable, how do we do that?

"What we test is the customer experience from a live network. It's not in the labs anymore; it's been brought to an area in Berlin where we have commercial services at commercial sites and we can see how it works if we bring it into the field. The outcome for us is seeing if what we have prepared in our labs will be the same as in the field."

So far, so good, he claims, but the testbed actually has a twofold impact. By the end of the year, work on locking down specifications for the 5G NSA New Radio standard is set to be completed. Once these specifications are known, work on developing the equivalent ASN.1 communications protocol for the new technology will be completed by the end of Q1, which will allow NSA New Radio to be used widely and efficiently.

This was a welcome acceleration of original plans and something that has led to a flurry of testing activity since the change in timetable was first announced in March.

Jacobfeuerborn says trials like this are an attempt to cement thinking that the industry is getting behind unified NSA technology. He says: "We want to show what the industry can do but in the end, it will only work if we have a standard around and all operators stick to that."

Once the 3GPP work is done, Jacobfeuerborn is hopeful this will have a knock-on effect on developing another 5G use case – network slicing across borders. Deutsche Telekom, along with SK Telecom and Ericsson, held a demonstration of this technology in February, and the Swedish vendor recently released a report talking up its benefits.

Jacobfeuerborn describes this use of the technology as a "game-changer" but one that requires roaming and interoperability consensus that makes it easier said than done. He says: "It's not an easy thing to make happen because we are talking about other networks, other countries and other operators. That's why we are working together with Ericsson and vendors to make it happen."

While Deutsche Telekom has been pushing heavily on 5G, Jacobfeuerborn jokingly bemoans the lack of sporting events in his home country as that would help stimulate excitement and investment. He says: "I'm jealous that we don't have an Olympic Games in 2018 in Germany. Or World Cup or whatever. If you have an event of that magnitude, we would have to show the world that we are very innovative, we can do something out of it and we can make it happen."

Perhaps unsurprisingly, he says the multinational nature of Europe makes it more difficult to get things done at scale compared to the likes of the United States or Asia. He says: "If you look at somewhere like China, they just do it. It's a difficult political environment."

While there is a confidence when he talks about the development of 5G and Deutsche Telekom's role in it, his faith in whether Europe can do enough to make up on lost ground appears to be more based on hope than expectation. He says: "At the moment there's a lot of debate and discussion, good discussion, don't get me wrong, but the question is 'are we able, as a community of operators, politicians and vendors, to make it happen?'"

He adds: "We have to show that it works, that the use cases are behind it and we have to build it." As simple as that? "Well, it's simple to explain it but it takes a lot of debate and a lot of discussion."