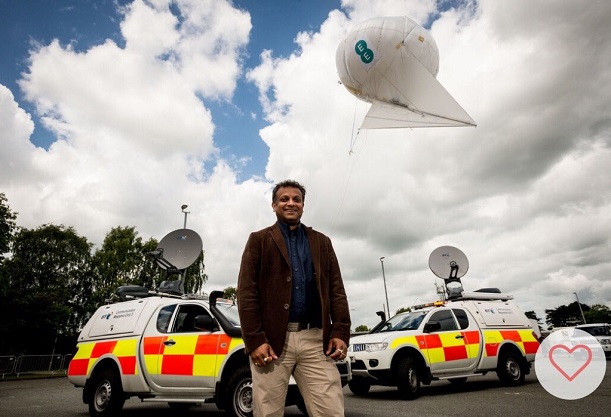 EE’s forthcoming drone fleet could be used for tasks as diverse as transporting network infrastructure to increasing coverage, according to the operator’s ‘Droneman’.

Ayan Ghosh, Collaborative Trials Principal at BT’s Converged Network Research Lab, revealed the goals for the project as he provided an update into how EE is using airborne masts to reach remote areas of the UK.

Speaking at a Cambridge Wireless event about rural small cell deployment, he explained that the impetus for the project came from the operator’s obligations under the Emergency Services Network (ESN) contract, which requires it to reach 100 percent coverage in the country.

A range of problems with its macro network convinced EE to look for other solutions. “When we built the base stations we were asked to plant some trees by the local authorities,” said Ghosh. “The trees have grown but the masts haven’t. We have a lot of attenuation through the leaves and trees."

Among the other incidents he described was a base station in Carlisle that had been flooded, sites torn apart by gale-force winds in the Scottish Highlands and a site near Bristol disabled by an arson attack. He said: “All these challenges lead to network downtime.”

The operator’s thinking around the air masts was not always so clear, admitted Ghosh, who invented the technology now being trialled on EE’s network.

“Olaf Swantee, our then-CEO, had said in the press that we would have air masts,” said Ghosh. “I saw a picture of this massive base station on a balloon flying in the sky and thought this would never work.

“That’s when I started to think of a different way to do it, using small cells.”

EE first publicly revealed details of its plans to use “air masts” in February. The two solutions are drones and helikites, or balloons, fitted with small cells. Ghosh's own enthusiasm for drones is longstanding, with him listing himself as "Droneman" on his LinkedIn page.

A wide array of partners is supporting the Air Mast project. The operator worked with Nokia and Parallel Wireless on the base station. Phazr provides mmWave backhaul connectivity, Avanti provides satellite, VoltServer provides the power system, AllSopp Helikites provides the balloon platform, and uVue works with BT Labs to build the drones themselves.

Aside from providing the anticipated remote coverage and emergency response scenarios, Ghosh said drones could be used to plan coverage, inspect telecoms insfrastructure, and deliver equipment and parts in a similar way to how Amazon anticipates delivering packages to customers.

Although Ghosh did not provide details of exactly how many trials had been conducted, he explained that each solution fits a different type of scenario.

Drones are more suited to situations requiring fast deployment and limited subscribers. Depending on the level of time the drone needs to fly, it can be equipped with power via a cable, or simply powered by a battery.

The obvious context for these swift deployments is emergency services provision, where Ghosh envisaged a four-by-four vehicle driving out to the area in question and quickly deploying a drone to provide connectivity for the services.

Balloons are suited to situations where a slower deployment is acceptable, but provide better endurance and deployment footprint.

Other testing focuses on the connectivity of the drones. Working with Parallel Wireless and Phazr, EE tested 4G access in the 2.1GHz band, using the 26GHz mmWave band for backhaul connectivity.

Future areas of research include reducing the weight of the payload and weather-proofing of drones, said Ghosh.

Ghosh also had high hopes for the Droneway, a corridor of water of the Scottish coast which will use small cells in lighthouses to provide a safe testing ground for drones. Sites have been selected for surveying and drone vendors are being approached for participation.

It could be some time before we see EE’s drones and balloons hovering in the UK sky, but Ghosh's enthusiasm for how the technologies could improve telecoms definitely sits within the heroic.