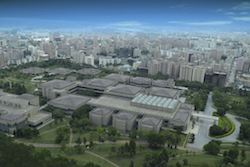 One statistic was all it took to show how far Europe has fallen behind Asia when it comes to mobile innovation.

Speaking at Huawei's Global Mobile Broadband Forum in Shanghai this week, David Wang, President of Wireless Networks at Huawei, said there are fewer than 150,000 4G enabled base stations across Europe. In contrast, China Mobile will have one million by the end of next year, hitting 570,000 by the end of 2014.

Alex Sinclair, CTO at the GSMA, was blunter still about the differences between the markets. When he spoke of travelling from his native UK to Seoul in South Korea, he said: "For me, it's like travelling two years into the future."

So how has Asia leapt ahead? The GSMA's Sinclair summed it up when he said: "The model that seems to work here is to deploy new technology and drive usage very heavily. Once you drive usage, you get the scale."

The reality was explored by Korean operator LG Uplus. When the iPhone first hit the Korean market, the operator's market share slumped without the device. It then decided to bypass WCDMA and move onto 4G.

Lee Chang Woo, the operator's CTO, said the wealth of services the operator offers on top of LTE, spanning VoLTE, its Netflix-alike offer U-Flix, and the ability to watch up to four television feeds simultaneously, fuelled growth.

Consumers are now data ravenous, according to the CTO, consuming an average of 2.6GB per month, compared to 800MB per month on its 3G networks.

Lee said: "From the beginning we thought of the service platform that would sit on top of the pipe we were building. We came up with the HDTV service and that's the most prominent one that we provide. You need to discuss with many other partners like content providers in order to pursue a win-win strategy in the market."

China Mobile agreed, saying it was digital services, products sitting outside those of traditional voice or data, that would fuel future growth. The operator is predicting those services will account for almost a third of its revenue by 2016.

So going further is key. GSMA's Sinclair added: "It's not just taking [technologies] from the standards bodies; it's about improving them."

Another advantage the Asian market appears to have is that of a more encouraging regulatory structure. Sinclair said: "You have an industry friendly and forward thinking regulator in Asia. Elsewhere, we have an inclination to tax."

But it's not all plain sailing for Asia. As in Europe, one disadvantage of rolling out at scale is having to cope with disparate local markets and regional differences.

On average, data usage is predicted to increase across Asia one thousand-fold between 2010 and 2020 but in Shanghai, for example, there is expected to be a six hundred-fold increase.

Nevertheless, China Mobile is continuing to announce ambitious plans for its LTE network. It said speeds of 1GBps are possible on an LTE network and it plans to do so through carrier aggregation across five bands of frequency. Li said: "1GBps should be the goal of 4G, not 5G."

Overall, however, the discussions highlight a healthy picture for Asia that their European cousins will have to learn from and quickly.