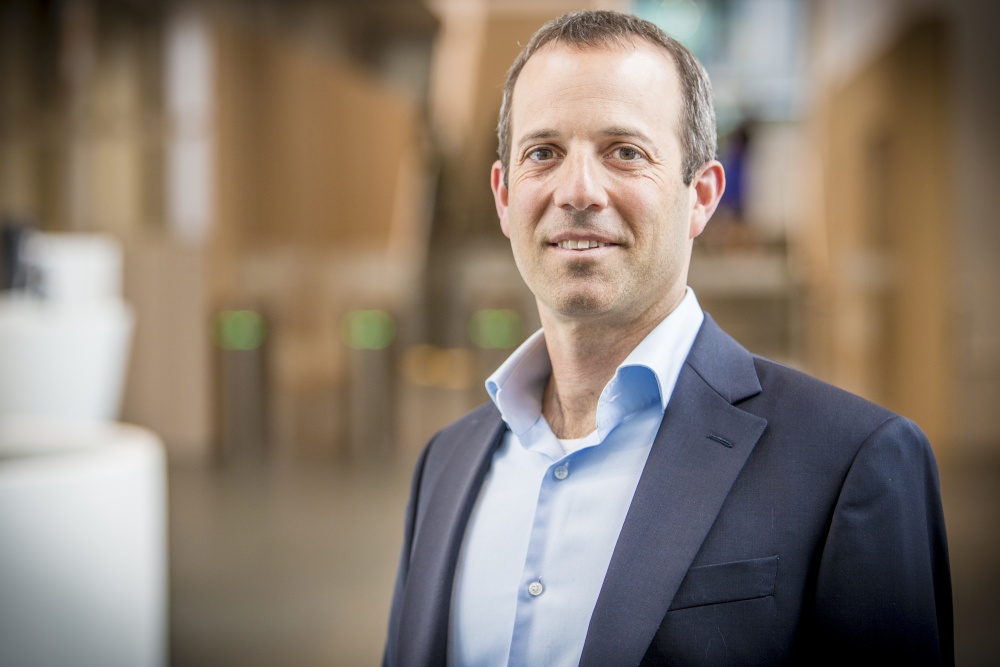 Micha Berger is our Trailblazer CTO of the Year 2020. He talks to Annie Turner about the vision behind his company’s ground-breaking success, his views of the market and where Telenet is going next.

It is an immense achievement as the former underdog in Belgium (both in the fixed and mobile sphere) to have built one of the most advanced digital infrastructures in Europe in a few short years. This is especially true because, with the best will in the world, infrastructure cannot be built overnight.

Micha Berger’s watch as CTO at Telenet Belgium began in July 2013. He comments, “We are very, very pleased that we invested so much [in fixed infrastructure]. because we are so far ahead of the competition. Our rivals woke up to the fact that they can only offer 100Mbps and are spending a lot of money trying to catch up with fibre networks, but that is impossible in a very short period of time. It will take them maybe another ten years to reach the quality and the capabilities we have.”

He dismisses the idea that fibre is inherently superior to cable networks as “marketing” and says that customers should not care what the underpinning network is – whether FTTH, cable, xDSL, fixed wireless access or anything else – only how it performs.

Berger has no doubt that investing heavily in Telenet’s DOCSIS hybrid fibre coaxial (HFC) network was the right thing to do as the DOCSIS 3.1 infrastructure had a lot of useful life left in it. As Berger says, “We can get it to run at 2.5Gbps relatively easily, both ways, and that will take you a long way in marketing and sales with your customers and keeps our competitive advantage.”

Naturally, he is already considering what happens when speeds beyond 2.5Gbps are needed: “That’s when we look at PON [passive optical network] technology and the new xGSPON [the X stands for ten, the G for gigabit and the S for symmetrical] standard. The next question is, ‘When do you need 10Gbps?’, just like I asked myself about 1Gbps six years ago.

“What we invested in the past is paying off for us today, clearly. Now we need to see how in ten years’ time we keep our competitive edge.”

Part of the answer to that question is to look at what new versions of DOCSIS will make possible, and when, in comparison to full fibre. He says, “If we cannot invest in technology to compete with fibre in some areas, we will also put fibre to the home where it makes sense to us. Our advantage is that we can play with the two media, based on the best return on investment, timing and need.”

Success is a double-edged sword

Berger states, “We are more innovative, and we have been quicker and very professional about our investments, but it is a double-edged sword as the competition is becoming much more aggressive, because they were slower and bet on the wrong technology.”

The regulator has also stepped in after Orange Belgium called for a better deal on wholesale access to Telenet’s network. Berger states, “I’m not a politician so I can tell you what I think about the regulatory approach. We’ve invested money in the network and done what we were supposed to do from a responsible perspective to support Belgium’s future infrastructure. Then the regulator told us we must give access to others, because our competitive advantage is too big as a result of our investment and the quality of our network.”

He points out that the data growth in fixed networks is terrific: “Especially during these Covid times, we have between 40 and 60% year-on-year growth downstream and 60 to 70% upstream. We think there is room to improve the pricing to get a fair return on investment and to be able to provide a proper network for the future of this country, and that’s what I feel is my responsibility.”

He adds, “If I don't have enough money to do it, then there’s a problem with this pricing mechanism –and that’s my personal fear.”

We are Liberty Global family

Liberty Global owns about 60% of Telenet – how important is it being part of that family? Berger says, “I’m very close to my colleagues in the other countries, such as Jeannie York who is the CTIO of Virgin Media [Liberty Global’s UK subsidiary], and the same with VodafoneZiggo in the Netherlands and other countries. We are very much aligned and share best practices for technologies between us.”

Learning from successes within the group works at a larger scale, too. In 2015, Telenet acquired mobile operator BASE, which was a poor third to the mobile networks of Orange and Proximus. Berger explains, “We understood that the acquisition needed investment and a network upgrade,” but he has a firm belief that, “When you get to a certain size or a certain scale it makes sense to own a network, because then you can independently determine the pace of your growth and decide what your cost base will be.”

He continues, “As you see, Virgin Mobile’s success with their mobile offerings means the appetite to buy a mobile operator becomes bigger and that’s exactly what happened to Telenet [with BASE], too. As an MVNO, we had over a million customers, running on Orange’s network. We bought BASE, because then the scale made a big difference for us, and the same happened with Ziggo and Vodafone, which are very successful in the Netherlands.”

Berger says, “To migrate our customers from the Orange network, which was high-performing, without causing any dissatisfaction on the service level, we invested around €250 million. There were fewer than 2,800 [base station] sites and we aggressively upgraded the network within 18 months, adding more capacity based on the spectrum licences we held, and, without bragging too much, we immediately started catching up with the competition to become a stronger and more powerful mobile network in Belgium.”

He acknowledges, “We don’t have the most sites in Belgium, as it is very expensive to build and maintain sites here, but we added almost 800 and are competitive in the drive-test measurements, with customers able to reach average download speeds of between 70 to 90Mbps – the highest of any operator in Belgium.”

Once again, success comes with a price, though, as rivals Orange and Proximus have formed a joint venture to build and share network to cut costs, the better to compete against BASE. Berger comments, “It is painful and, of course, we can compete from a technical perspective, but we also have to stay competitive from a cost point of view.”

Until a few weeks ago Berger was also running Virgin’s Mobile ‘MVNO-light’ in the UK, which ran on EE’s network and relied on many of EE’s systems. However, the company was in the process of building its own core network before the Virgin Media and O2UK merger was announced and will migrate to the O2 network once the merger is completed, which is expected to be later this year.

Aside from the big changes that are afoot for Liberty Global in the UK, Berger has also relinquished his UK responsibilities, “because in my Telenet job I have a lot of challenges in the IT space,” he says.

He admits, “It is in my character and I am very much aware of it, that I like big projects. I am driven to get projects out there, to build as fast as we can and finish them on time to meet the business’ needs. With infrastructure, the scope and targets are clear, but IT is a bit of a different story, with a different kind of complexity. There are proprietary solutions all over the place, and all intertwined with the business. You don’t have a lot of standards, which makes it much more complicated.”

However, Berger has an IT background from long before he moved into network engineering and he takes the same approach to both. He elaborates, “I am very determined about roll-out and meeting timelines… My fixed and mobile team is fully consolidated. I don’t have fixed engineering and mobile engineering, I have only access engineering. In the IT space I have an application organisation that does all the software development for the company, whether that’s on the network or IT side.”

He continues, “It is not easy to do an IT transformation and sometimes you have to decide how far to go regarding quality versus what benefits the business gains, and that can be a very difficult decision. We are very successful regarding how long the transformation took to start, even though we had some delays.”

After a few years’ preparation, development, migration and testing, Telenet has launched its new IT platform with Netcracker and migrated all its mobile customers onto the new platform, and they will be followed next year by the operator’s fixed customers. Berger says, “That’s a big part of my focus for at least the next two years – to complete this migration and to have a full new IT stack, ready for the future of this company.”

The future of OSS and BSS

Regarding that IT stack, he says, “It is important to keep the different layers separate. The OSS will get closer to the network for activating services and the like. The BSS [will] become like a product catalogue skeleton that runs some business process activities and billing. The clever coding we used to put in the BSS will go up into what we call the CSS or customer support service layer, and above that we will have a digital support layer.”

The layers might need to be separate, but in Berger’s opinion, “It is essential there are links between them through very flexible [industry-standard] APIs. This means [that] when you want develop new capabilities on the platform, you don't have to start untangling code or writing it.”

On a similar theme, he says, “The holy grail for us as a service provider is to understand how to link loads of data [that] we get from the network and elsewhere, such as the access network, the network within the home, from devices and about service experience that we get from customers. We want to link it all back onto the top, onto the CSS layer.”

One area he believes needs to be developed is customers’ experience of the network within their homes, where many struggle with Wi-Fi. He says, “We need to help the customer manage in-home connectivity and take that data, study it, then translate it into processes that can support our customers in a delightful way.”

Making the case for 5G

Berger thinks the current crop of 5G use cases is relatively boring and that we need better business cases to justify investment in 5G. He comments, “Much as I love to invest in infrastructure, when I asked for money to invest in 5G our board asked me to justify it with the business case. They say, ‘If we use 5G like we 4G, we failed, because we won’t to be able to charge more for it and if you cannot charge more it’s no good business-wise’. I agree; it will boomerang back at us somewhere down the road when we haven’t enough money to invest later on and our customers are dissatisfied.”

On the other hand, the fear is that competitors will simply put it out there and give it away for free. “We have to find killer use cases that the customers will benefit from and that will benefit us so we can continue to invest,” Berger notes.

He thinks those use cases will be both for consumers and enterprises. He thinks low latency and, to a lesser extent, higher speeds will prove to be the magic ingredient that will bring “a lot of new ideas from smart people who build new products based on that capability that we don’t have today. We take it for granted and don’t appreciate that [mobile] networks are slow. When they become super-fast, new horizons will open up,” Berger predicts.