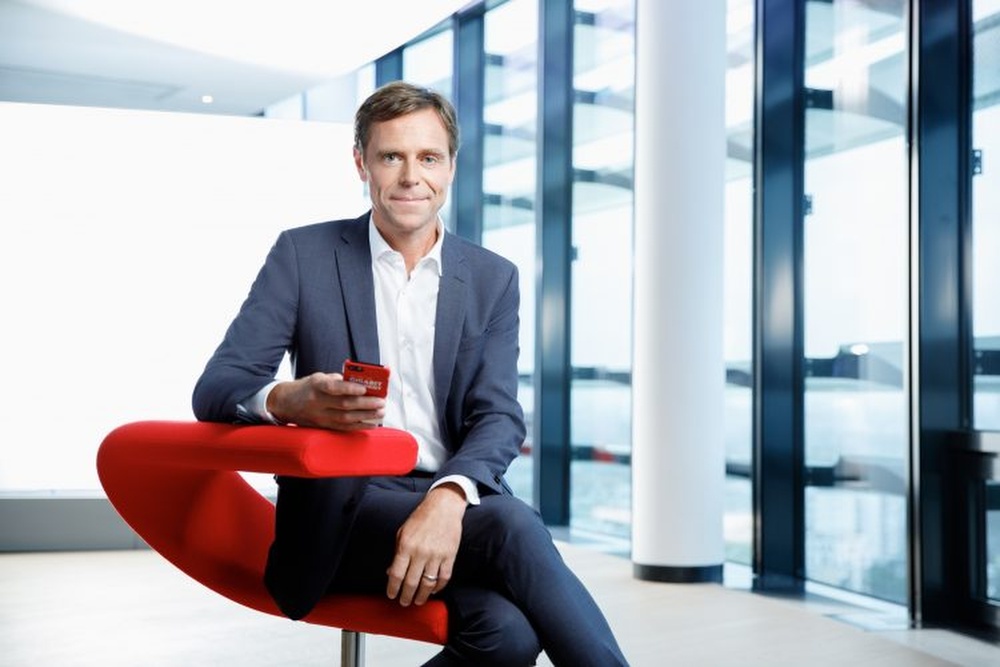 In addition to a gruelling auction for 5G spectrum and starting the 5G build-out, Gerhard Mack is responsible for integrating the Liberty Global cable assets that his company acquired this year. He still made time to talk to Annie Turner.

His other challenges include doubling the speed at which fibre and 4G are being deployed, but he  is clearly someone who takes things in his stride.

The deal was approved by the European Commission, after an in-depth investigation and certain remedies, in July. Nick Read, CEO, Vodafone Group, said, “With the acquisition of Liberty’s assets in Germany and [Central and Eastern Europe], we have completed our transformation into Europe’s leading converged operator.

"Not only have we reshaped our business, becoming the owner of the largest gigabit-capable, next-generation network infrastructure in the region, we are now able to play our part in realising the digital society for millions of customers.”

According to the Financial Times, the acquisition has shifted Vodafone’s centre of gravity away from its home market of the UK to Germany and “cemented the company’s position as the main challenger to Europe’s incumbent telecoms groups, including Deutsche Telekom.”

Beginning of the journey

Of course, completing the deal was only the beginning of the journey. Mack is responsible for enabling and ensuring the operational, and therefore commercial, success of the strategy in Europe’s largest economy. What does he think about it? “I’m a cable guy,” he says. “I was ‘acquired’ by Vodafone Deutschland when it bought Kabel Deutschland five years ago.

“As a cable guy, I have always been dreaming of getting all Germany’s cable reunified and finally we are there, so I’m super-happy, super-excited.

"It’s a huge push, a huge motivation, and it gives us the energy to get this integration done in a way that we really can get the best parts of both the operating processes and the best teams together, and be much stronger afterwards.”

He points out that integration is only part one of three main areas of effort, but that it is progressing “smoothly and nicely”. As Vodafone Deutschland was already experienced in running a successful cable business, Mack says, “There are no borders; we understand the language of cable and what work needs to be done.”

Vodafone Deutschland’s cable business is a success story in its own right, supplying more than 11 million German households with speeds of 1Gbps, using the latest standard for cable DOCSIS 3.1. He states, “There is a fantastic acceptance level and it is really running much better than we expected commercially. There is huge effort going into boosting the cable nodes and segments – we’ve doubled capacity over where it was last year – driven by our customers’ appreciation of what we offer them. By 2022, 25 million households will have gigabit speeds. We have the biggest deployment of DOCSIS 3.1 in Europe and are among the biggest in the world.”

Vodafone Deutschland is deploying fibre in places where there is no cable infrastructure to offer fibre to the building (FTTB) and fibre to the home (FTTH), although about 98% of its fixed estate is cable.

Mack accepts that Germany is a laggard in terms of FTTH: when it published its annual report in March 2019, the FTTH Council Europe ranked it 29th out of the 33 European countries with a penetration rate of just 2.3%. He says there are a number of reasons for this and that looking at fibre deployment in isolation provides a distorted view of the national communications infrastructure.

A primary factor regarding fibre roll-out is that Germany lacks the networks of ducts that are common in countries such as Spain and Portugal, where the population is concentrated in fewer centres. The vast networks of ducts in those countries’ cities make it quick and easy to blow in fibre cabling.

By contrast, the German population is far more spread out across the country, with a huge number of medium-sized towns and almost no dark fibre. Therefore, building out FTTH means “a lot of digging, and that is slow and expensive,” Mack notes.

At the moment some 3 million to 3.5 million homes have full-fibre connectivity out of the total of 40 million, with FTTx also being deployed by Deutsche Telekom, as well as alternative providers, in areas where xDSL is not available and where there is no cable infrastructure.

Some competitors and pundits have claimed that cable will not be able to deliver the capacity needed in future. Mack’s response is that DOCSIS 4.0 is due for release next year, which will enable speeds of up to 10Gbps, upstream and downstream, on cable infrastructure and, further, the more cable customers Vodafone Deutschland acquires, the deeper it brings fibre into the cable infrastructure, to the nodes where it is split, to provide the capacity where it is needed.

He remarks that this makes more sense than building out fibre and hoping that, once it is in place, people will sign up for it, especially as there is not much uptake of fibre in Germany. Even in areas where the build-out is subsidised and work doesn’t begin until 40% of households have signed a contract to take the service once it is available,

Vodafone Deutschland has adopted a strategy of offering gigabit fibre for the same prices as 100Mpbs, say, xDSL in promotional packages for the first year. At the end of the year, customers have the option of returning to lower speeds if they wish, but few make this choice, because once they see the value they don’t want to go back.

Mack says behaviour in the German market is changing more widely, though: “Whereas once the amount of capacity customers had didn’t affect how they used it, that is not the case now. We see strong proportionality to internet speeds and once customers have the possibility they become ‘addicted’ to using it. This is something that is really underestimated; you really get used to it… [but] it is an access technology. You shouldn’t care about the technology, but only the services to customers.”

Another big landmark for Germany this year was the 5G spectrum auction, which was drawn out over many weeks, had an unprecedented number of rounds of bids and turned out to be even more expensive than feared for the operators, which between them paid €6.4 billion.

Mack said the spectrum auction was the first one he’s ever been involved with and that it was one of the most painful episodes of his career. He also remarked wryly that at the end of it, all parties were in almost exactly the same position as they’d been in two weeks after the bidding started, except for collectively spending €6 billion more.

He is proud that Vodafone was the first to launch 5G services in Germany, but believes it is different from other European markets in that consumers are generally conservative and slow to try out new technologies. The operator has deployed Massive MIMO in Berlin and other cities, and has used 5G to provide fixed wireless access in some rural areas that were not served by any other broadband infrastructure.

On the other hand, Mack says, “Industry is much more aggressive and ready try out new things, and of course we have experience in providing services to that customer base.” Crucially, it is mostly looking to monetise 5G by helping this customer base digitalise, which is often referred to as Industrie 4.0.

Vodafone Deutschland is involved in about 150 pilots across different sectors, including smart cities, with each one requiring infrastructure with different parameters for different purposes. However, Mack does not seem unduly concerned that some large industrial groups have been allowed to apply for spectrum by the regulator, so that they can build their own private networks.

He notes that one of the biggest motivations for these large enterprises is the belief that they will save money, but he thinks they have massively underestimated the difficulty involved in building and running a network, and the complexity of 5G in particular – plus this regulatory policy has meant operators lost out on some spectrum, which is a scarce resource.

Also, scale is important in a number of ways. The capital costs of building the network are dwarfed by the total cost of ownership across its lifecycle, and this is far more economically viable at scale. At the time of writing, the German industrial group Bosch had just announced it has been awarded spectrum to build its own networks at some locations.

Mack comments, “This is fine for one factory, but a group such as Bosch has hundreds of them, as well as offices and other locations. You need scale, you need availability 24/7 and reliability at 99.99,” which is business as usual for a telco. Also, an operator can provide a secure hybrid private-public network that looks after issues of data privacy and more, and there is less risk involved in being part of a much bigger, telco-standard operation.

Mack says, “We love 5G because it brings us all sorts of potential applications due to its low latency,” but is not fixated on autonomous vehicles and network slicing. Besides providing 5G to connect people, industries, machines, cars and even drones, one of the biggest opportunities Vodafone Deutschland sees is around sports – and soccer is a very big deal in Germany.

The operator is running a pilot with the Deutscher Fussball-Bund (DFL – the German Football Association) and the Bundesliga (German Premier League) club VfL Wolfsburg, so that spectators at the football ground can use their smartphones to access augmented reality content in real time. This could be information about a particular player displayed on screen while they have the ball or different angles of a penalty shot – the possibilities are endless.

Mack says, “This shows that 5G is also a huge game-changer for things you couldn’t have imagined just a couple of years ago – we will be launching the service commercially right across the Germany premier league.

4G/LTE might grab the headlines less than 5G, but it is a critical part of national infrastructure. Mack says that for mobile as well as fibre, “We have shifted gear and doubled the speed of rollout.” He acknowledges that in the case of LTE there are certain coverage obligations, but emphasises this is not only one driver, adding, “There is huge coverage and capacity demand.”

Vodafone Deutschland completed 1,300 LTE site deployments in the first 100 days of 2019, adding 720 new LTE stations nationwide in the last quarter and installing an additional 700 antennas at existing sites. This connected more than 400,000 Germans to the LTE network for the first time. It also improved the speed and capacity for a further 3 million people.

The operator states that by September this year it had coverage of 95% of the country: the goal is to bring a new LTE antenna online every three hours by the end of the year. In 2019, more than 5,500 construction projects have been finished in order to get rid of dead spots and increase LTE’s capacity and surfing speeds on the Vodafone network.

Currently, Vodafone reaches more than 80 million Germans with its LTE network, which equates to about 95.8% of the population, and Vodafone technicians have closed LTE dead spots on a total area of 12,000 square kilometres.

It seems that if 2019 was a landmark year for Vodafone Deutschland, 2020 is going to prove pretty special too.