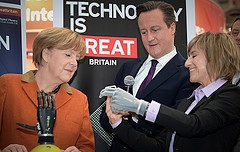 Universities in the UK and Germany will work closer together on 5G technology, as the British Prime Minister announced funding for the Internet of Things and a new spectrum strategy for the country.

Speaking at the CeBIT trade fair, David Cameron said he wanted to build upon the work carried out by London's Tech City. Since December 2010, the number of digital companies has grown from 200 to 1,300 today.

He commented: "It is our ambition to make the UK the most digital nation in the G8 and it is my mission to show the world that we’re getting there."

As part of this, Cameron announced a new collaboration between the University of Dresden, King's College University in London and the University of Surrey. The latter is due to open a specialised 5G Innovation Centre in January 2015, with the likes of EE, Telefonica, Vodafone, Huawei and Samsung contributing to its work.

Cameron said: "Three world-leading universities working on 5G hand in hand – that is something to be truly excited about."

During a speech where Cameron also called for a single telecoms market and the abolition of roaming charges, the Prime Minister said Internet of Things technology had "enormous potential to change our lives".

He explained: "I see the Internet of Things as a huge transformative development, a way of boosting productivity, of keeping us healthier, making transport more efficient reducing energy needs, tackling climate change. We are on the brink of a new industrial revolution and I want us – the UK and Germany – to lead it."

The UK government will spend €87.6 million funding research into the Internet of Things, according to the Prime Minister. A European grant fund was also launched, which gives up to €1.2 million to companies that are working in this area. According to research from Analysys Mason, operators made €7.20bn from the internet of things last year, with the market predicted to be worth €63.43bn by 2023.

Further, Cameron said the UK regulator Ofcom would outline a new spectrum strategy this week, which aims to double the economic benefits of spectrum to UK businesses and consumers to over €120 billion by 2025.

He commented: "We’ll do this by allowing new applications to come online, new kinds of mobile technologies to be used, more data usage to be enjoyed and greater broadcasting services to be made available."