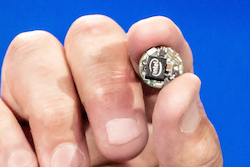 A number of companies have been pushing the possibilities of wearable tech at CES as they search for a killer app.

Intel revealed Curie, a low-power hardware module for wearable devices the size of a button.

The company claimed the module could be used to create wearables out of items including of rings, bags and jacket buttons.

Based on the Intel’s Quark SoC, the module is set to ship during the second half of 2015 and includes Bluetooth low-energy radio, battery charging and accelerator, accelerometer and gyroscope sensors.

The two companies said they are working on an intelligent product, available later this year, designed to enhance athletes' performance.

It consists of a helmet containing two-way communications connectivity that sends proximity alerts to Volvo cars when a cyclist is nearby.

Volvo vehicles installed with the manufacturer’s City Safety System can then detect, warn and automatically brake to avoid collisions with cyclists.

Stefan Ytterborn, CEO and Founder of POC, commented: “Our mission is to do the best we can to possibly save lives and to reduce the consequences of accidents for gravity sports athletes and cyclists.

“The partnership with Volvo Cars aligns very well with our mission and we are excited to see how we can contribute to cyclist safety and increase interaction between cars and cyclists alike”.

Fitness-based wearables were on display too, with Sony showing off a prototype of its Smarteyeglass Attach, a lightweight display module containing a camera that can be attached to eyewear to provide a variety of visual information.

One potential use case Sony offered was that the device could help runners navigate unfamiliar cities.

Sony also showed off the Sony Smartwatch 3 steel, a stainless steel version if its latest smartwatch.

Finally, Razer revealed its latest fitness band, the Razer Nabu X, that allows users to receive notifications from paired Android and iOS devices via Bluetooth, as well as offering “social functions” to let wearers communicate with each other when nearby.

Smart wearables market to quadruple thanks to cheap software