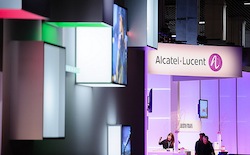 Alcatel-Lucent has performed a key demonstration of its Voice-over-IMS and RCS technology to the board of the First Responder Network Authority (FirstNet), which oversees communications for emergency services in the US.
FirstNet was established in February 2012 by the Federal Communications Commission (FCC) to create and operate a nationwide public-safety LTE network on existing public safety broadband spectrum 763-769/793-799 MHz, as well as on the spectrally adjacent 700 MHz D Block spectrum 758-763/788-793 MHz.

According to A-L, voice support on the FirstNet network would help to reduce costs as emergency services personnel will have the option to use a single device for both data and non-mission critical voice communications.
Thanks to RCS, the new technology will also extend interoperability to critical voice communications, for example when emergency services need to start roaming on the FirstNet network during a disaster recovery operation when regular base stations are down.
Currently, emergency agencies such as the police and fire fighters are not able to collaborate communications on their separate agency-owned Land Mobile Radio (LMR) networks.
Voice-over-IMS is an open standards-based solution that can provide VoLTE over the FirstNet 700 MHz public-safety spectrum, once Band 14 LTE devices with a VoLTE client become available.
According to Pamela Clark-Dickson, Informa senior analyst for Mobile Content & Applications, there is a much higher focus in the US on the development of public safety networks than there is in most other countries.
“The US has been, and still is, a key target for acts of terrorism. It has a high incidence of gun-related multiple homicides and natural disasters such as flooding and tornados occur fairly regularly,” she told Mobile Europe.
“The geographic size of the US coupled with its population, and the density of its population in areas where natural disasters occur, are also factors which influence the country’s prioritization of the development of public safety networks.”
In Europe, European governments are asking mobile operators to deploy the infrastructure and technical solutions able to broadcast simple mobile messages to all their subscribers thereby improving emergency responses and public warning systems.
LTE VoLTE