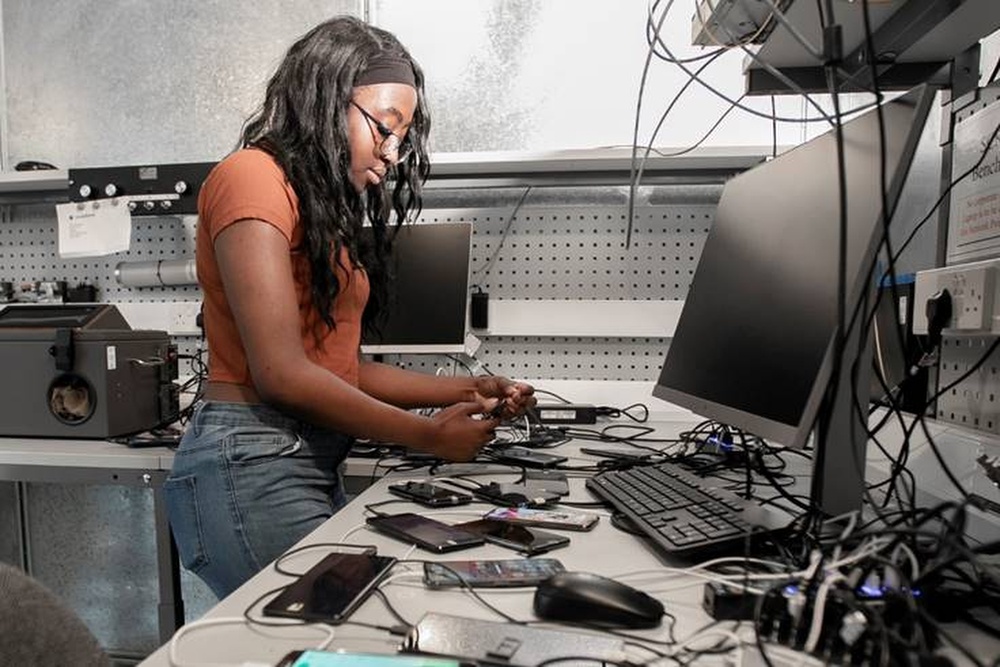 How many software engineers does it take to change a telco? Vodafone thinks the answer is 7,000 by 2025.

He also announced the new division would add 7,000 software engineers to its workforce over the next four years, although he stressed they would not all be new staff.

More than half will be retrained staff, some will be the result of insourcing – that is bringing some functions in-house that hae been carried out by external partners – and the rest from new recruits, including graduates.

The picture, courtesy of Vodafone, shows Vivian Sunmola, software engineering apprentice at Vodafone, setting up the remote testing of network features on a range of smartphones in the lab.

Wibergh explained this is a key strand in Vodafone’s strategic goal of becoming a “digital enabler”, enabling the group to offer more products and services, built on and around its core connectivity offer.

Apparently the group has invested €8 billion in the last financial year in setting up Vodafone Technology.

The engineers will be encouraged to experiment and invent new services using cloud native digital architecture which will be made available to 300 million mobile customers, 28 million fixed broadband and 22 million TV customers via platforms built by Vodafone Technology.

He said it makes sense for Vodafone to develop these new revenue generators because the total cost of having an internal, rather than outsourced software engineer, is cheaper by about 20%.

Also of course, Vodafone gets to own the intellectual property, rather than a vendor that can sell the expertise it gains to Vodafone's rivals.

Competing for a scarce resource

There's a lot of competition for software engineers, but retraining staff is smart move and Vodafone is laying out clear career paths and progressions for its softwrare developer force.

Another factor, particularly in Europe, is that telcos have generally excelled themselves during the pandemic, and are seen as providing services that benefit individuals, communiities, society at large, businesses and national economies.

Many are skinning themselves, finally, to close the digital divide, while redoubling their sustainability efforts.

This sense of purpose beyond just being a commercial organisation might well attract those who want their work to have meaning beyond their pay cheque.