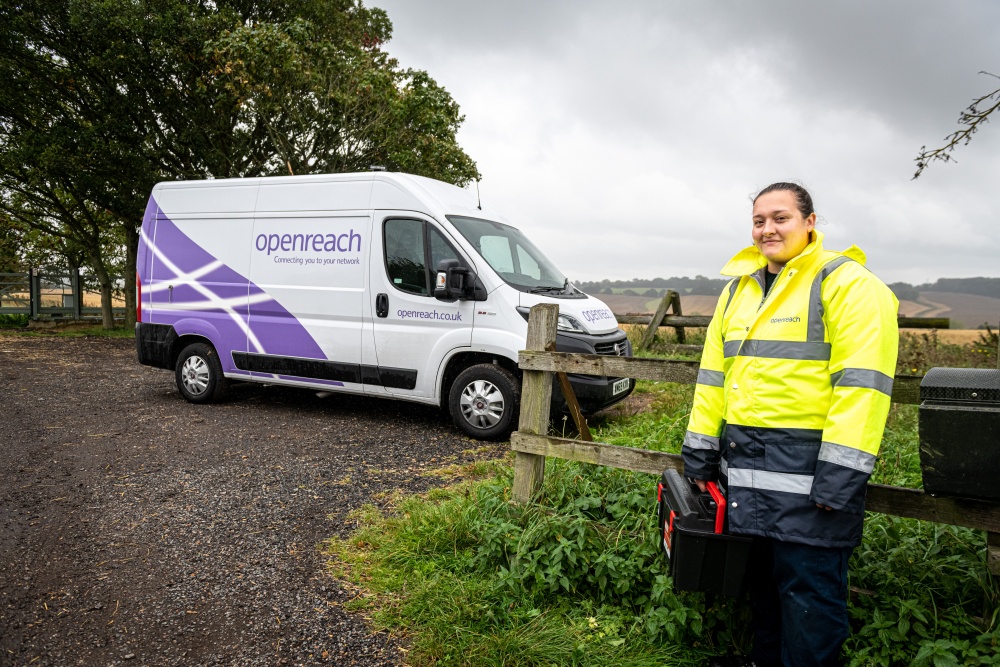 BT’s semi-detached wholesale arm has committed to reaching 3 million more homes and businesses in the hardest to reach areas.

BT/Openreach is positioning itself as the national champion with its new pledge to reach a total of 6.2 million rural premises means that rural homes and businesses account for quarter of its total fibre build-out.

This rural push is part of Openreach's wider ambition to reach 25 million homes with gigabit fibre by the end of 2026.

It states this commitment means the government will achieve its revised-down target of upgrading at least 85% of the UK by 2025.

The government’s pre-election target was 100% and a budget of £5 billion, now reduced to £1.25 billion in this Parliament, although it has said it would hand out more if network builders put forward sufficiently innovative solutions.

To put BT's announcement into context, the UK is ranked third from the bottom in the FTTH Council Europe's latest figures on fibre penetration and the newly merged Virgin Media (with Telefonica UK/O2) promised to bring gigabit speeds to more than 15 million homes across its UK network by the end of 2021.

Like rival fibre network builder CityFibre, BT/Openreach is looking for outside investment to help it fund the accelerated and extended build.

Not so hard to reach?

Most of the newly added locations fall within Ofcom’s designated Geographic Area 3, defined by the regulator as the 9.5 million premises in the least commercially viable areas of the UK for competitive broadband infrastructure upgrades.

Even so, Openreach says its expanded rural programme will protect the public purse, as it means few homes and businesses will need taxpayers to subsidies the upgrades.

How is this apparent contradiction possible? According to Openreach, it is "using a range of innovations and techniques to deliver world class build costs, whilst a major investment in 11 new regional training centres is helping to equip and skill thousands of new engineers".

As a result, Openreach believes it can build fibre broadband to up to four million rural and urban premises a year (about 75,000 per week, which is about 15,000 every working day) under its commercial programme.

The parameters of that commercial programme are that build costs fall within BT Group’s publicly stated range of £300-£400 per premises passed, on average, excluding connection costs. All locations upgrades are subject to detailed survey.

Having reduced its field workforce drastically, preferring for a time to invest massively in football rights, since 2017-2018, BT has filled some 9,000 apprenticeship roles and just announced it will recruit 1,000 more to build and install fibre broadband.

Openreach claims to be building fibre broadband out faster and at lower cost and higher quality than anyone else in the UK. Not everyone agrees with that assessment.

The company says the 1,000 apprentices it is seeking to recurit are in addition to the 2,500 announced in December.