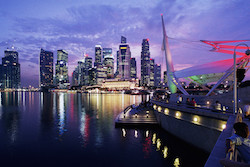 They will fund, develop and operate xScale data centres in Europe to support hyperscale customers, including cloud service providers.

They will build an initial six data centres, siting one in Amsterdam and Paris, and two in both London and Frankfurt, on some of Equinix’s existing sites.

The data centres will be built to serve “the unique core workload deployment needs of a targeted group of hyperscale companies, including the world’s largest cloud service providers,” according to a statement from Equinix.

This is to meet the growing demand for enterprises increasingly adopting hybrid multi-cloud as their IT architecture of choice.

This is borne out by Equinix’s latest Global Interconnection Index (GXI), an annual market study, which predicts private connectivity at the edge will grow at a 51% compound annual growth rate (CAGR), and exceed a total bandwidth capacity of more than 13,300Tbps, the equivalent of 53Zettabytes of data exchanged annually to 2022.

This is enough to support every person on Earth simultaneously downloading a complete season of Game of Thrones in ultra-high definition resolution in less than one day.

• The ability to exchange large volumes of data through interconnection, that is direct, private traffic exchange between key business partners –  is essential to compete in the digital economy. It predicts that consumption of interconnection bandwidth will grow at 64%, outpacing other kinds of business data exchange, and at 67% in Europe, the Middle East and Africa (EMEA) region.

• By 2022, London will account for 34% of European traffic, with Frankfurt, London, Amsterdam and Paris together accounting for almost 78% of it.

• Today’s latency-sensitive workloads demand response times ranging from <60 to <20 milliseconds, forcing IT infrastructure closer to the points of consumption (the edge).

• A quarter of IT decision-makers in the UK are using interconnection to increase speed of connectivity versus 31% in EMEA and 34% globally.

Interconnecting to multiple network providers across multiple edge locations is the most prominent use case for interconnection bandwidth and is expected to quadruple by 2022.

Interconnecting to multiple clouds and IT services across multiple edge locations and cloud regions represents the next largest and fastest use of interconnection bandwidth and is predicted to grow by 13 times by 2022.

Sachin Gupta, SVP, Product Management, Enterprise Networking Business, Cisco, commented, “As enterprises embrace the imperative of digital transformation, they increasingly adopt multiple cloud-based applications to meet their objectives. This places pressure on the network to deliver a fast and secure application experience to users located anywhere in the world.

“With both applications and networks becoming more distributed, enterprises today will continue to require a low-latency, interconnected architecture to securely connect end users with business-critical applications.”

“This shows interconnection is a critical business asset for companies increasingly looking to operate across borders and in doing so, broaden customer bases”.