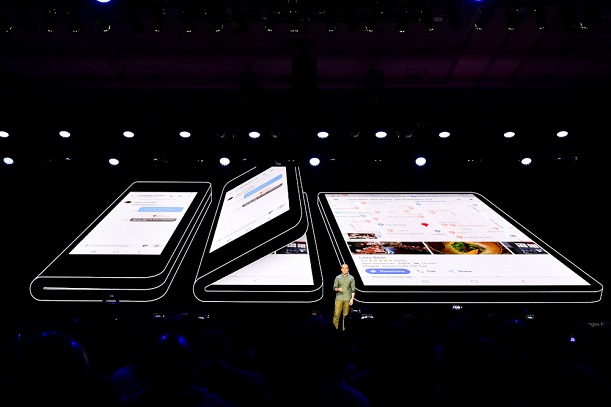 Samsung has finally launched its much rumoured foldable phone with a new device that is able to flip from a tablet to conventional smart device.

The Korean smartphone maker, the world's biggest but one increasingly under threat from Chinese rivals, made the announcement at its developer conference in San Francisco.

Concrete details such as release date or pricing were kept under wraps but Samsung said the Infinity Flex display paves the way for new methods of consuming content to multitasking.

The handset can be transformed from the standard smartphone size to a 7.3 inch tablet style display.

A new UI allows apps to shift from smaller screens to the larger display automatically. In total, three apps can be used at the same time in the tablet form.

It said it has built a new flexible and durable material for the smartphone's screen, as well as an adhesive that can withstand frequent folding and unfolding of the device.

Samsung said the device uses its new One UI, its spin on the Android operating system. It displays the most relevant content to a user at the bottom half of a screen.

It said this would make it easier to reduce on-screen clutter and help a user to navigate their device one-handed.

The handset maker also unveiled a new partnership with Google and the Android developer community to work on new kinds of services for the handset.

Folded handsets are potentially one way of reinventing the smartphone, which is showing signs of a longer term slowdown after years of explosive growth which Samsung has greatly benefited from.

IHS Markit claimed earlier this week that smartphone shipments had dropped for the second quarter in a row.