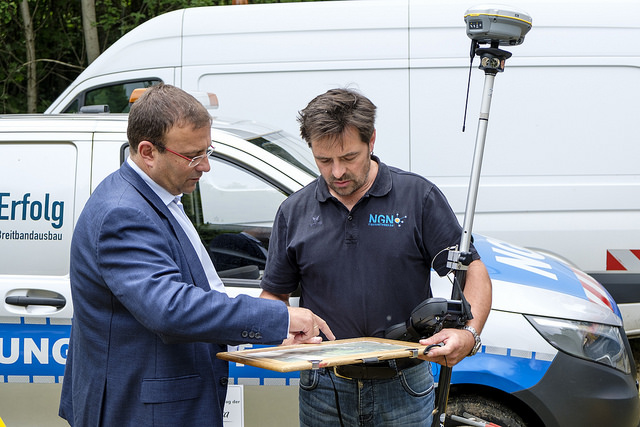 Telefónica Deutschland has started work on its fibre network expansion which it said would help lay the foundation for 5G services, as UK provider Openreach signs up Huawei and Nokia for its own fixed line rollout.

The operator is working with German fixed line provider NGN Fiber Network to connect at least 1,500 infrastructure sites to fibre.

NGN, which has a nationwide network of around 15,000 kilometres and is adding up to 800km of new cable per year, will act a general contractor for the operator, planning, building and activating the network to Telefónica Deutschland's base stations. The fibre provider will also maintain and service the fixed line network.

The contract was signed in April but formally kicked off with a groundbreaking ceremony yesterday at a base station outside of Munich.

The project will dovetail with Telefónica Deutschland's ongoing integration of E-Plus' network, which it bought in 2014.

The operator described the project as "on the finish line". Tens of thousands of base stations have been modernised, with LTE coverage broadened and capacity strengthened across the country. It has also used virtualisation to install new services quicker.

Cayetano Carbajo Martín, Chief Technology Officer of Telefónica Deutschland [pictured], said: "We are currently accelerating the expansion and modernisation of our mobile network in order to create an even more efficient O2 network for our customers.

"In doing so, alongside the major grid integration project, we are initiating the fundamental transformation of our network, preparing it for virtualisation and future technologies such as 5G. Our network of the future will be an essential part of becoming the mobile customer and digital champion.”

Meanwhile in the UK, Openreach has signed up Huawei and Nokia to provide kit for its plans to install FTTP to three million buildings by the end of 2020.

The two vendors' headend kit will manage data signals between a customer's premises and the wider network.

Huawei has already started work on deploying its technology, with Nokia expected to follow suit from July 2019.