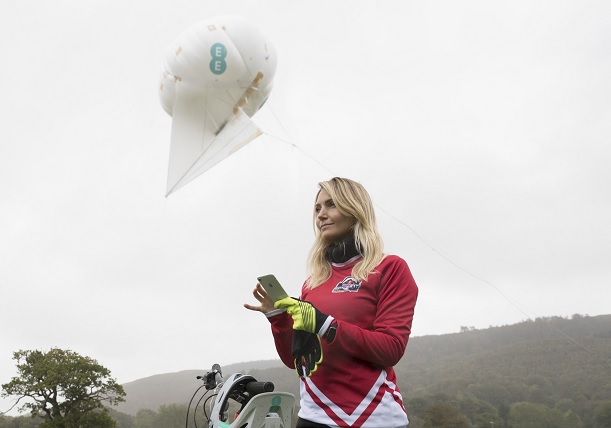 EE has used a 4G air mast at a motorbike event in the first commercial trial of the technology.

The BT-owned mobile operator deployed its Helikite solution at the Red Bull Foxhunt event in Wales over the weekend.

Helikite, details of which were unveiled in February, consists of a small cell inside a balloon that is connected to the ground by a fibre tether providing both electricity and backhaul.

Floating 300-feet in the air, the balloon was used to offer LTE to EE customers and Wi-Fi to all attendees.

The 200 riders used EE’s network to broadcast live streams of the race to EE’s Facebook page via Samsung 360 Gear Cameras paired with an iPhone 8.

EE’s Special Projects Division worked with Ericsson engineers to deploy the solution, although the radio equipment in the Helikite is supplied by Nokia.

EE Chief Executive Marc Allera said: “We have 4G coverage in more places than any other operator and are going to extraordinary lengths to connect communities across the UK, but when we saw the remote location of Red Bull Foxhunt we knew we had to go even further – and our ‘air mast’ technology was the perfect solution to provide coverage on demand, keeping everyone at the event connected.”

Unfortunately, the news was announced as EE was having to apologise for a network outage yesterday (10 October) that meant some customers were unable to make voice calls.

Allera said in a statement on Twitter that the outage was due to a fault in the operator’s interconnect platform, which is responsible for moving calls around the network.

According to the website Down Detector, which collates and analyses complaints about services from users, the problems affected users across the country, including in London, Birmingham, Manchester, Leeds and Glasgow.

Service was fully restored around 6PM.

Alongside Helikites, EE is also trialing drones as it looks to reach 100 percent coverage in the UK, a requirement stipulated in its contract to supply connectivity for the country’s emergency services.

Read more: The sky’s the limit for EE’s 'Droneman' as operator pushes on with airborne small cell project