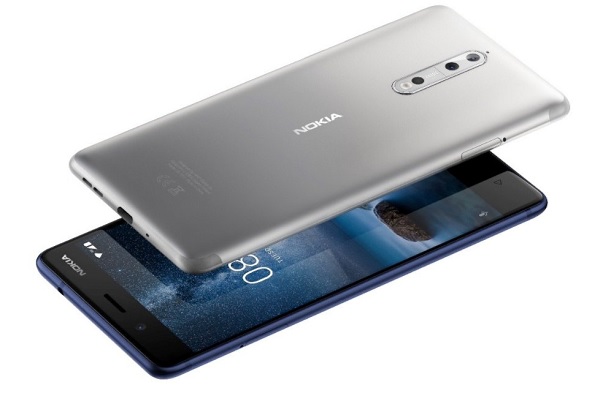 The Nokia brand is taking on the premium smartphone market with the launch of its flagship Nokia 8 device.

The Nokia 8 use three microphones to record audio across 360 degrees and also has the ability to take front and rear facing photos or video simultaneously through its Dual-Sight feature. The latter is enabled through a partnership with Zeiss Optics, which it signed in July.

Running on the Qualcomm Snapdragon 835 processor, the Android-based phone is also enabled with Qualcomm’s QuickCharge feature.

The smartphone will have monthly security updates and offers fingerprint authentication.

The device is set to launch in Europe in September, with the global average price set at €599.

Juho Sarvikas, Chief Product Officer of HMD Global, said: “We know that fans are creating and sharing live content more than ever before, with millions of photos and videos shared every minute on social media.

“People are inspired by the content they consume and are looking for new ways to create their own. It’s these people who have inspired us to craft a flagship smartphone which perfectly balances premium design, an outstanding experience and powerful performance.”

In a briefing note analyst firm CCS Insight said: “Despite an obvious focus on "creators", the most important thing for HMD Global will be getting the Nokia 8 to appeal to the broadest possible audience.

“The Nokia 8 moves HMD Global beyond its largely anodyne current mid-tier Android phones. The device has an important role as a "halo" product that could add a shine to its siblings.

“Whether features such as Dual-Sight and 360-degree audio recording will be enough to lure consumers away from Apple and Samsung remains to be seen. But HMD Global should be applauded for adding innovative elements to a nicely designed product as it seeks to carve out a position in this notoriously challenging market.”

Nokia and HMD Global announced the return of the brand to the mobile phone market at Mobile World Congress 2017 with two new smartphones, the Nokia 5 and the Nokia 3.

The Nokia 3310 also relaunched as a budget alternative.

Since then, HMD Global has also launched the Nokia 105 and 130, which are feature phones targeting the budget market.