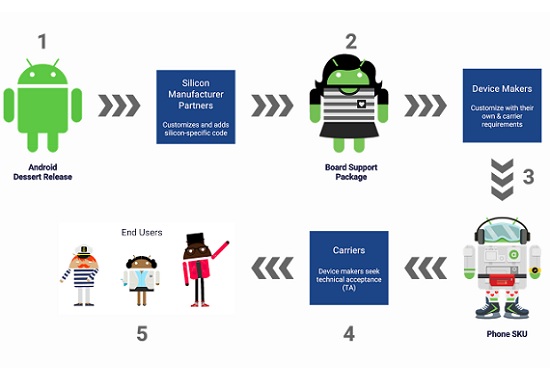 Google has launched a new project aimed at making it quicker for device manufacturers to offer the latest version of Android.

The operating system (OS) has received steady criticism for the slowness of its updates.

The most popular version of its OS is Marshmallow, which sits on 31.2 percent of Android smartphones but dates back to 2015.

Nougat, the most up to date version of Android, is only on 6.6 percent of Google friendly handsets, according to recent figures from Google.

The reason for this, according to Google, is the number of steps it has to go through to reach the market.

It said once Google releases the open-source code for Android's latest release, chipset makers need to modify it to make it compatible with their own hardware.

This modified version of Android then is passed onto device manufacturers, who modify it further so it can work with their smartphones or tablets.

Before it finally hits the market, these devices must go through certification tests with operators.

Google said it wanted to build a compatibility programme for OS like it did for apps, which allowed developers to write one app that can run across every single Android device from a variety of manufacturers.

Project Treble is the result, a new interface between the framework of the Android OS and the implementation by vendors.

Iliyan Malchev, Project Treble Team Lead, said: "With a stable vendor interface providing access to the hardware-specific parts of Android, device makers can choose to deliver a new Android release to consumers by just updating the Android OS framework without any additional work required from the silicon manufacturers."

Malchev said Project Treble will be part of Android O, the next generation of its OS that will be launched this summer.