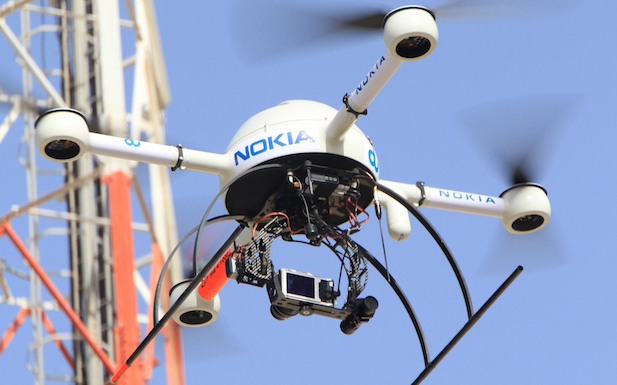 EE has used a drone to carry a compact Nokia base station to areas around Inverness, in northeast Scotland, and establish remote LTE coverage.

The trial saw the pair attach a lightweight LTE base station to a drone, allowing LTE services to be provided upon landing, wherever the drone can reach.

“High quality LTE voice calls between responders, video streaming and up to 150 Mbps data throughput were all achieved, with no need for a connection to an external core network,” it said in a blog post.

Nokia also tested the backhaul of a standard small cell with the EE core via satellite, to demonstrate feasibility of set-up in the event integration to an existing core is needed.

Deutsche Telekom was the first European operator to deploy drones, or ‘unmanned aerial vehicles’, with T-Mobile in the Netherlands using them to inspect its networks at FC Utrecht’s stadium in March.

Ericsson and Cosmote in Greece, and Nokia and du in the Middle East have also tried them in recent months.

Meanwhile, EE is variously engaged in rolling out coverage to remote areas of the UK.

In April it announced plans to offer LTE coverage to 95 percent of the UK's landmass, as opposed to the more usual metric of population.

EE is working with UK-based Lime Microsystems to deploy its programmable ‘network-in-a-box’ solution, LimeSDR, on the two islands in the Hebrides, off the west coast of Scotland.

It is also planning to install LTE small cells in two lighthouses along the Scottish coast, providing better wireless connectivity between the mainland and the Hebrides for both Caledonian MacBrayne ferries and the RLNI, as well as to support drone-deliveries of essential items.

A third aspect, led by the University of the Highlands and Islands, will see the development of digital health applications for communities on the islands. The project is to be absorbed into a workstream of Facebook’s Telecoms Infrastructure Project (TIP) around the access network.

EE is also half-way through rolling out a ‘micro network’ to more than 1,500 rural communities in the UK, where there is hardly any fixed or mobile connectivity to speak of. It’s a two-year gig, it reckons, scheduled to run into 2017.