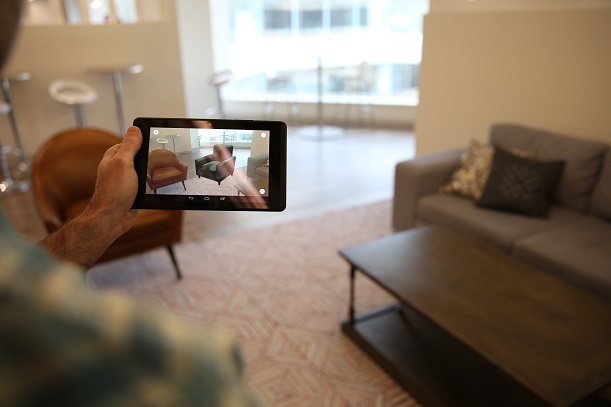 Google's augmented reality Project Tango will launch in September, after Lenovo announced the first compatible handset for the technology.

The project, which Google has rebranded as Tango, was first announced in 2014 and aims to use a smartphone to provide consumers with more sophisticated location based services than typical devices.

The aim is to build augmented reality apps to provide services such as 3D gaming, overlays for the likes of museum tours, and easier home improvements, where consumers can visualise the placement of furniture in their homes.

The phablet is powered by a Qualcomm Snapdragon 652 processor, which handles processing, LTE connectivity and camera and sensor processing.

The 6.4 inch device also features two rear 13MP cameras, with Lenovo boasting its Fujitsu image signal processor is the same that powers Leica cameras. When launched, the handset will cost $499 (€441).

Jeff Meredith, Vice-President and General Manager of Android and Chrome Computing, Lenovo, said: “Put simply, we wanted to take what was an amazing concept and transform it into a commercially viable mobile device. From the moment we saw Tango, we knew it could become pervasive, just like GPS.

"However, to truly make the PHAB2 Pro a game-changer, we developed it at an affordable price for mainstream consumers, delivering not just a bleeding-edge phone, but an all-around fantastic phone that’s first to market.”

Johnny Lee, Engineering Director at Google, said: "Tango enables our devices to sense physical motion and space and, as a result, has the power to change how we interact with our surroundings. We believe that devices with positional tracking functionality will be pervasive and are happy that the PHAB2 Pro will introduces these new capabilities, making your phone even more useful."

Yesterday Gartner identified augmented reality as one of the must have technologies for smartphones in over the next year.

Meanwhile, Lenovo also launched a new range of modular Motorola handsets yesterday. The Moto Z is just 5.2mm thick and features magnets so consumers can clip on the likes of projectors, battery packs or speakers