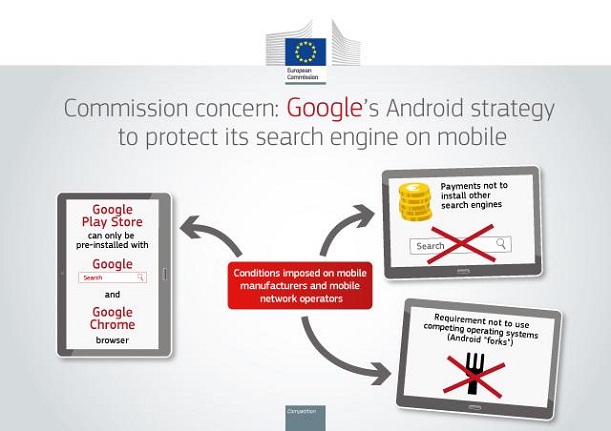 The European Commission has said Google is in breach of anti-trust rules, accusing it of harming consumers through a stifling of competition and restriction of innovation.

The complaint centres on Google's operating system, with the Commission unhappy with the pre-installing of its own Search function on Android smartphones.

The Commission said this closes off rival search engines to access the world's most popular operating system, which has an 80 percent market share across Europe.

In its Statement of Objections, the latest stage in proceedings that first begun in April 2015, the Commission outlined where it felt Google has breached EU antitrust rules.

As well as requiring manufacturers to pre-install Google's search and Chrome browsers in devices, and set Google Search as the default service, it has accused Google of stopping manufacturers from selling devices that run on competing OS that are based on Android's open source code.

Finally, it said Google has paid manufacturers and operators to exclusively pre-install Google search on devices.

Commissioner Margrethe Vestager, who is in charge of competition policy, said: "A competitive mobile internet sector is increasingly important for consumers and businesses in Europe. Based on our investigation thus far, we believe that Google's behaviour denies consumers a wider choice of mobile apps and services and stands in the way of innovation by other players, in breach of EU antitrust rules. These rules apply to all companies active in Europe. Google now has the opportunity to reply to the Commission's concerns."

The Commission will only make a final ruling after Google has been able to defend its practices.