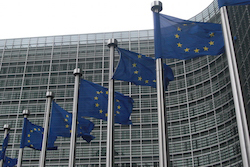 The European Union has entered a “milestone” agreement with Japan to work together on developing global standards for 5G, including a €12 million investment into the technology.

The agreement, which comes a year after Europe signed a similar declaration with South Korea, sees Japan and the EU working toward a global definition of 5G, including key functionalities and a target timeframe for implementations.

The collaboration will also set out to identify which radio bands can be harmonised globally in order to meet spectrum requirements for the technology, as well as exploring 5G applications for connected cars, digital healthcare and other industry ecosystems.

Meanwhile, €12 million will be pumped into “5G-related projects” over the next two years, including IoT, cloud technology and big data platforms.

Similar to the 2014 agreement with South Korea, the latest declaration, signed by Japanese Minister Sanae Takaichi and European Commissioner Günther Oettinger, forms part of the EU’s efforts to create a “digital single market” in Europe.

At this year’s Mobile World Congress in Barcelona, Oettinger waxed lyrical on the importance of Europe’s role in making 5G the core of the future economy, claiming that regulatory policies would have to be revisited in order to put the continent at the forefront of 5G development.

The EC said in a statement: “Such international agreements strengthen the position of the EU on the global stage and complement current efforts to create a Digital Single Market in Europe. By breaking down barriers and creating the right environment for innovative industries to develop, the EU will become an even more attractive and dynamic continent.”