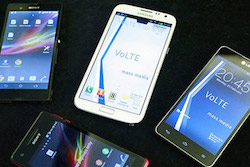 Increasing deployments of VoLTE and VoWi-Fi have led the VoIP and IP multimedia subsystem equipment markets to grow by more than a quarter during the past 12 months.

New research from IHS revealed the market was worth $1.3 billion (€1.2 billion) in the first quarter of 2015, up 29 percent on 2014. While sales growth was largely driven by deployments in the United States, IHS said all regions experienced growth, with Latin America up 88 percent.

Alcatel-Lucent was singled out as the biggst vendor for VoIP and IMS equipment sales, thanks to its performance in North America.

Diane Myers, research director for VoIP, UC and IMS for IHS, said: "VoIP and IMS equipment sales bucked the typically slow first quarter, with year-over-year growth in the first quarter being driven by core IMS solutions and voice application servers. While all regions contributed to growth, activity in the US pushed it over the top this quarter."

IHS said it expects the number of operators commercially offering VoLTE to swell from the existing 22 throughout 2015. EE and Vodafone in the UK have both announced plans to launch the technology this year.