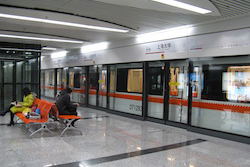 Gemalto’s secure NFC SIM cards will be used to bring tap-to-pay travel services to Shanghai and Beijing as part of a new initiative with China Telecom.

Commuters will also be able to pay for everyday purchases using the system, which will be embedded with China Mobile’s BestPay mobile payments application. Gemalto added that its UpTeq SIMs are also embedded with its 4G management software, allowing users to download apps and additional value-added services via NFC “with the convenience and speed of mobile broadband.”

As a result of the deployment, approximately 45 million daily commuters in Shanghai and Beijing will be able to ride public transport using their smartphone alone, Gemalto claimed.

Suzanne Tong-Li, President for Greater China and Korea at Gemalto, said: “China Telecom has been Gemalto’s partner for a long time. Last year, we provided specially-designed NFC SIMs for their nationwide launch of NFC services.

“With 4G FDD-LTE commercial license, they will be able to leverage the additional LTE feature of Gemalto’s SIMs to offer faster and enhanced NFC services to their customers, leading to a wider adoption of mobile contactless services across the country.”

Netherlands-based Gemalto recently published its findings on an attempted interception of SIM encryption keys at the company, concluding that the attack was likely carried out by UK and US intelligence agencies.