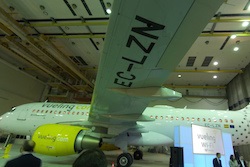 This is achievable due to HTS’ reliance on spot beam technology, which delivers power via multiple, narrowly-focused beams and allows frequency to be reused similarly to a mobile network.

Telefónica said the result was that passengers could experience a broadband experience similar to ground-based ADSL, accessing download speeds of up to 20Mbps.

The battle to bring connectivity to the skies has resulted in a number of partnerships between telcos and airlines in recent months.