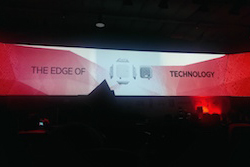 Regulatory adjustment is crucial if Europe hopes to be at the forefront of driving a new industrial and economic revolution resulting from 5G, the European Commission has said.

However, Oettinger said regulation must be addressed if the continent is to achieve these lofty ambitions, adding that lessons must be learnt from Europe's lagging in the 4G race as a result of regulatory stand-offs.

While he pointed to recent successful roll-outs of LTE-A networks in the region as signs of a turnaround, Oettinger said more had to be done and called on regulators to enable investments in 5G-supporting infrastructure by mid-2015.

Oettinger said: “It’s not just about phones, but cars, health, education… the digital economy is simply becoming the economy.

“Europe has a great opportunity to reinvent its telecommunications industrial landscape with 5G - a golden opportunity to spearhead revolution in Europe and the transformation into a single economy.”

He also warned that Europe “couldn’t afford” to abstain from 5G spectrum debates, labelling access and connectivity as a central priority for the EC and highlighting the need to work with key member states towards 5G’s 2016 stabilisation targets.

Oettinger said: “Europe should be - and must be - at the forefront of this [5G] development”.

Hu used his time onstage to share his vision of a “super-connected 5G world”, highlighting the need for the technology’s ultra-low latency for fully-autonomous vehicles and future industrial applications.

He said: “More than just an upgrade, 5G will become a powerful platform that enables new applications, new business models, and even new industries – as well as many disruptions.”

As the two speakers shared their views, the Next Generation Mobile Networks (NGMN) Alliance unveiled its finalised 5G whitepaper.

The document presents a complete overview of end-to-end operator requirements for the future development of 5G platforms, the NGMN said, containing contributions from more than 100 experts from the telco industry.

Peter Meissner, CEO of the NGMN Alliance, commented: “The NGMN 5G White Paper provides essential and long expected input for the work of many industry bodies. Together with our global partners from industry and research, we will now focus on setting up and implementing a 5G work-programme ensuring that future solutions will meet our ambitious targets.”

Deutsche Telekom threw its weight behind the whitepaper, claiming it had undertaken a “leading role” in its development, while committing itself to further pushing the technology.

Bruno Jacobfeuerborn, CTO of Deutsche Telekom and Chairman of the NGMN Board, said: “In future, almost everything will communicate with each other. 5G will provide a further basis for that.

“With 5G we create a worldwide standard for homogeneous communication. That means a common global language – because communication has no local borders.”