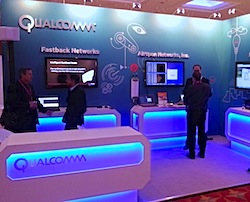 Qualcomm has become the latest company to throw its weight behind LTE-U technology, with plans to integrate it into its small cell portfolio and radio transceivers.

The tech company's subsidiary Qualcomm Technologies has recently completed over the air testing between numerous LTE-U and Wi-Fi access points and will demonstrate the results at next week's Mobile World Congress.

It has extended LTE-U functionality into its FSM99xx family of small cells SoCs, which will go on sale during the second half of this year. The systems on chip support 3G, LTE and 802.11ac Wi-Fi. It also launched a dedicated RF solution, FTR8950, for small cells to meet LTE-U requirements.

Further, the vendor announced the first commercial RF transceiver for mobile devices to access LTE-U. The WTR3950 28nm transceiver pairs with another Qualcomm chip, WTR3925, that supports up to three carrier Cat-6 aggregation. It also supports up to 40MHz intra-band contiguous carrier aggregation in the 5GHz bands.

Matt Grob, Executive Vice President, Qualcomm Technologies and its Chief Technical Officer, said: "As the Internet enters a new phase of growth, in which more devices are connected and share richer data, there is a need to cost effectively address the challenges of a 1000x increase in mobile data traffic. To do this, we need a combination of more spectrum, more efficient use of existing spectrum and more small cells. Our job is to help the industry make the best use of all available spectrum, using both LTE and Wi-Fi technologies, to increase capacity."

LTE-U is increasingly being seen as a way of meeting capacity demands, with Nokia Networks and Ericsson both recently announcing fresh breakthroughs.

"Education for all" essential for SDN/NFV success, claim CTOs