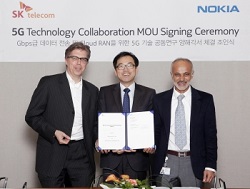 Nokia Networks and SK Telecom have announced plans to develop millimetre wave technology as part of a 5G project aiming to commercialise the technology by 2020.

The vendor will work with the Korean operator to set up a 5G test bed at SK Telecom's corporate research and development centre in Bundang, Seoul. Both companies will also develop the likes of gigabit level data and cloud-based virtualised base stations.

Both companies will concentrate on frequencies from 6GHz and above, using MIMO technology to achieve gigabit-class data speeds. The results of the research are expected to be demonstrated by 2018.

It builds upon a deal both companies signed in the summer, with plans to cooperate on developing virtualised technologies, software-based networks and cloud-based network management. It revealed its Cloud vRan virtualised base station technology in November 2014.

Hossien Moiin, Head of Technology and Innovation at Nokia, said: “The future of mobile telecommunications network will not only connect people, but things as well. In the end, 5G will further extend human potential through advanced telecommunications technologies.

"Together with SK Telecom, Nokia will make efforts to allow diverse futuristic services to be efficiently provided through 5G technologies.”

Choi Jin-sung, Executive Vice President and Head of Corporate R&D Center, said: “By joining hands with Nokia, we expect to accelerate our speeds toward the development of core 5G technologies. Envisioning an era where all things and people are organically connected, SK Telecom will continue to bring innovative changes to the mobile network structure.”

It is the latest 5G partnership deal SK Telecom has signed to explore the potential of the technology. In November, it said it was teaming up with Samsung in a bid to make their native Korea the home of 5G innovation.

Among the technologies it plans to research with the electronics company are small cells, massive MIMO and next generation modulation/demodulation.