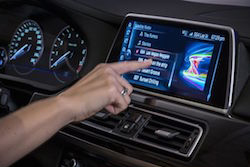 The connected car is proving a focal point for manufacturers at this year’s Consumer Electronics Show, with Broadcom, Samsung and Qualcomm all making announcements in automotive connectivity.

Broadcom took to the stage on Monday to reveal new NFC and Ethernet chips for connected cars. The company’s integrated BCM89095 automotive NFC chip allows drivers to pair a mobile phone with their vehicle simply by tapping it against the dashboard, avoiding the need for users to navigate two separate screens. From there, drivers can access connected car settings whilst also simplifying the process of setting up functions such as keyless entry, Broadcom claimed.

Additionally, the chip can be embedded into a vehicle’s windshield, where it can exchange authentication data, user profile and vehicle information with a NFC-enabled digital key.

Broadcom said the chip also would allow for “new comfort and convenience features” in connected vehicles, with potential use cases for car rentals as well as providing access to locked garages or restricted buildings.

Broadcom added that the digital key could potentially be used to make NFC payments.

The company claimed the new BCM89811 transceiver could deliver the functionality of “multiple discreet devices” and had been designed to enable new uses “beyond infotainment and Advanced Driver Assistance Systems (ADAS)”, including telematics and dashboard instrumentation. Integrated security features also protect the vehicle from cyber threats, Broadcom said.

Both Broadcom chips are now in the sampling stage.

Rival Qualcomm showcased two concept cars at the event that would be the first to feature its in-vehicle connectivity tech, including its Snapdragon 602A automotive-grade processor, Gobi 3G/4G LTE wireless modems and VIVE QCA6574 Wi-Fi and Bluetooth module.

One of the high-tech vehicles being shown off is a 2015 Cadillac XTS, featuring integrated support for Android 5.0, LTE Broadcast and wireless charging for electronics.

Vehicle manufacturers have also been out in force at CES, with BMW unveiling a new infotainment system incorporating Samsung devices.

Touch Command allows rear seat passengers to control their own surroundings via an embedded Samsung tablet, connected to the vehicle’s infotainment system via Wi-Fi. From there, backseat passengers can access their own in-car entertainment, as well as being able to adjust rear-compartment comfort functions such as seat adjustment and climate control.