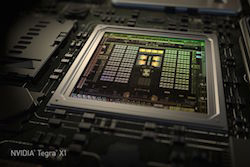 Chipmaker Nvidia has unveiled a mobile SoC with over a teraflop of processing power aimed at furthering advancements in machine learning and automation.

Nvidia said Tegra X1 “super chip” provided double the processing power of its predecessor and had been built for applications in machine “deep learning” and computer vision, to help enable more intelligent technology for robotics and autonomous vehicles.

The SoC will power the manufacturer’s recently-announced Nvidia Drive car computers, which include an autopilot platform with self-parking capabilities as well as a “cockpit” platform that provides infotainment, HUD and virtual mirror systems thanks to advanced graphics capabilities.

Nvidia said the chip was the first mobile processor with capabilities to rival supercomputers and games consoles, featuring an eight-core 64-bit CPU and 256 GPU cores.

It also revealed that the X1 was built on the same Maxwell GPU architecture used in its high-end GeForce GTX 980 graphics card.

Speaking at Nvidia’s CES press conference on Sunday, CEO Jen-Hsun Huang said: "We see a future of autonomous cars, robots and drones that see and learn, with seeming intelligence that is hard to imagine. They will make possible safer driving, more secure cities and great conveniences for all of us.

"To achieve this dream, enormous advances in visual and parallel computing are required. The Tegra X1 mobile super chip, with its one teraflops of processing power, is a giant step into this revolution."

The Tegra X1 will become available during the first half of 2015, Nvidia said.