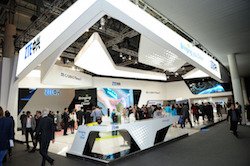 ZTE has announced it carried out a field test of pre-5G massive MIMO technology in partnership with China Mobile, while rival Huawei unveiled its own prototype.

The vendor said it created a “5G-like” experience by accelerating throughput between four and six times.

According to Huang Yuhong, VP of China Mobile Research Institute, the pre-commercial field test was “impressive and exceeded our expectations”.

He added: “[We] will continue to strengthen our partnership with ZTE in the development of 3D/massive MIMO and other 5G technologies.”

Dr Xiang Jiying, CTO of ZTE’s Wireless Division, commented: “As the number of antennas is ten times more, 3D/massive MIMO had appeared to be a distant pipe-dream. However, the test indicates that we are taking a big step forward to realising the new technology using 4G handsets.”

Huawei, Tele2 disagree on role of spectrum for 5G