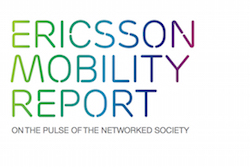 The amount of mobile data traffic generated between 2019 and 2020 is predicted to be greater than all that that has occurred before 2013, according to new research from Ericsson.

The vendor’s latest Mobility Report forecasts that mobile data traffic will rise at a CAGR of 40 percent between now and 2020, with monthly smartphone traffic in Western Europe growing eight-fold.

Video traffic alone is set to increase ten-fold and will account for 55 percent of all mobile data traffic by 2020.

Meanwhile, the amount of mobile traffic in Asia-Pac is forecast to grow 90 percent between 2014-2020 due to increased uptake of mobile subscriptions in countries such as India and China.

Ericsson claimed that a total of 800 million new smartphone subscriptions were added in the whole of 2014, bringing the total number of worldwide users to 2.7 billion.

By 2020, 90 percent of the world's population over 6 years old will have a mobile phone.

Rima Qureshi, CSO and Head of M&A at Ericsson, commented: "The falling cost of handsets, coupled with improved usability and increasing network coverage, are factors that are making mobile technology a global phenomenon that will soon be available to the vast majority of the world's population, regardless of age or location”

The report also touched on the subject of 5G, which is expected to be commercially deployed in 2020 and has been a hot topic amongst telcos in 2014 in particular.

Ericsson said 5G would need to meet “new performance levels” beyond simply improved broadband speeds if the technology was to be fully realised.

The vendor highlighted a number of new technologies expected to emerge at the dawn of 5G, including “mass-marketed personalised TV” and “massive machine-type communication”, in which huge numbers of sensors and embedded devices are connected together so that batteries can last for over a decade.

Qureshi added: “In 2020, the world will be connected like never before.”