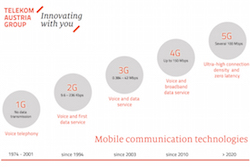 Telekom Austria has joined the Next Generation Mobile Networks Alliance (NGMNA) in a bid to influence the development of 5G technologies.

The operator said it will work with the NGMNA to help define end-to-end requirements for the 5G standard and future mobile communications, with the aim to have compatible systems going live by 2020.

The NGMNA said Telekom Austria’s far-reaching network in Central and Eastern Europe - which spans some 40 million inhabitants - and “extensive expertise” in the field put the operator “in a position to exert a decisive influence on the definition of 5G standards.”

Günther Ottendorfer, CTO of Telekom Austria Group, commented: “As a member of the NGMN Alliance, the Telekom Austria Group has committed itself to the definition of the 5G standards and can therefore make a significant contribution to future standardisation in the mobile communications area.

“We are delighted to have the opportunity to turn our 5G visions into reality in the years to come and to play a key role in determining future technological developments.”

The NGMNA hit the headlines in September when Apple announced it was joining.

The industry body said it plans to explore next-generation app and business model applications for the 5G standard, as well as other technologies the new networks will make available.

This year has seen a number of significant steps being taken towards the realisation of 5G technology, with various telcos collaborating to help ensure global interoperability and global standards for the technology.

In Korea, Samsung recently teamed up with SK Telecom to conduct 5G research into technologies such as small cells, signing a memorandum of understanding to work together on picking the right frequency bands for 5G.

In June, the European Commission announced a landmark agreement with the South Korean government to further the development of 5G by cooperating on research into the technology.