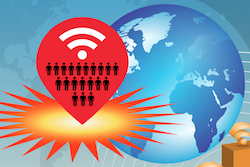 The study also revealed that 50 percent of all commercial hotspots are currently controlled by non-telco brands, highlighting a “power shift” from traditional telcos to business owners such as cafes and retailers.

Peter White, co-founder of Maravedis Rethink, said: “Our data shows that in the coming years it’s Wi-Fi that will steal the limelight as consumers’ thirst for data goes beyond anything that cellular can deliver, and as business owners see the value Wi-Fi brings to helping them differentiate and innovate.”

Speaking to Mobile Europe, iPass CMO June Bower explained that the places that would see the most successful hotspot deployments were those that could figure out how to monetise Wi-Fi effectively. She said this needed a different approach to how to offer cellular connectivity.

She said: “In the world of Wi-Fi, monetisation is very different. We’ve seen many examples of interesting models and there are many interesting things being tried by companies right now. One of the things that’s going on with Wi-Fi that you don’t see happening with cellular is that half of the hotspots out there today are controlled by brands, and those brands are looking at Wi-Fi in a very different way from how a cellular carrier might.”

As an example, Bower pointed to a partnership between Starbucks and Google in the US, in which the internet giant provided free hotspot connectivity to the coffee chain. In return, Google was provided access to customer data, which it could use for advertising and analytical purposes.

Bower said: “Data is really going to be king in the end. [Brands] want to understand more about what people are doing, where they’re going and how they’re using it, and that data becomes very valuable to their advertisers.”

Commenting on the findings, Evan Kaplan, CEO of iPass, said: “A messy and fragmented global Wi-Fi network is emerging; the challenge is that it needs to be easy for consumers to access and simple for providers to monetise. This is where we’ll see the platform players like Facebook and Google come to the party. They have the ability to help this new breed of Wi-Fi provider get paid in meaningful currencies – namely cash, advertising or user data.”