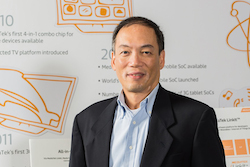 MediaTek is eyeing the higher end of the chipset market after launching a unified SoC platform for "super-mid market" handsets.

The new 64-bit MT6735, which incorporates CDMA2000 to provide support for FDD/TDD LTE, 3GPP, DC-HSPA+, TD-SCDMA and EDGE, is being offered primarily as a unified platform for mid-tier devices.

However, MediaTek CTO Kevin Jou told Mobile Europe that the company ultimately has its sights set on the higher end of the smartphone market and hopes to compete in the same space as rivals Qualcomm.

Jou commented: “We’re going for the higher tier - we want to be on equal footing technology-wise to all of our competitors and more. The hope is we’ll be able to address all the top-tier guys, and part of the reason we included the CDMA2000 into our modem portfolio is because of that.

“Tier One [vendors] want to have a product built on a platform that can be sold worldwide. It took us a couple of years, and now we’re finally ready.”

Jou commented: “We do everything turnkey [and] integrate a lot more features and capabilities into our SoCs. Qualcomm started off as a pure SoC vendor and they liked to do stuff on their own. But in our case, we start off on a low-end and build more and more capabilities into our chips, and now that Qualcomm is going into the turnkey business, they still need to learn how to integrate all that stuff.”

The MT6735 consists of a quad-core 1.5GHz ARM Cortex-A53 processor featuring MediaTek’s CorePilot multi-processor control system, which the company said provides a performance boost for smartphones. It also supports low, mid and high RF bands, as well as dual-band WiFi and Bluetooth 4.0 for wider applications in headsets, wearables and other smart devices.

Jeffrey Ju, SVP and General Manager of Wireless Communication at MediaTek, said: “With CDMA2000, we offer global reach, driving high performance technology into the hands of users everywhere. We also strongly believe that as LTE becomes mainstream in all markets, the processing power must be consistently high to ensure the best possible user experience.”

MediaTek also announced it was expanding its European footprint with the opening of a new office in Oulu, Finland, which will focus on developing wireless modems for “next-generation” smart devices. Additionally, the company unveiled an audio speaker SoC developed in partnership with Spotify, as well as the “world’s slimmest” smartphone featuring its octa-core MT6592 processor, the Kazam Tornado 348.