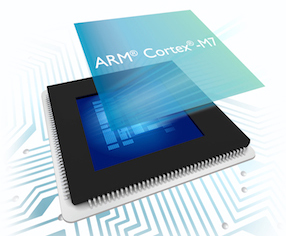 The company says the ARM Cortex-M7 delivers double the computing and digital signal processing capabilities of current high-end ARM-based microcontrollers (MCUs), and has been designed for embedded applications in smart control systems and next-generation connected vehicles.

Noel Hurley, general manager of ARM’s CPU group, said: ”The addition of the Cortex-M7 processor to the Cortex-M series allows ARM and its partners to offer the most scalable and software-compatible solutions possible for the connected world.

"The versatility and new memory features of the Cortex-M7 enable more powerful, smarter and reliable microcontrollers that can be used across a multitude of embedded applications."

Amongst the CPU’s listed features is its ability to deliver 2000 Coremarks at 400MHz in a 40LP process. It also supports 64-bit transfers for compatibility with large external memories and powerful peripheral devices.

So far, Amtel, Freescale and ST Microelectronics have all been granted early licences for the processor.

Reza Kazerounian, senior vice president and general manager at Atmel’s MCU business unit, commented: “We see the ARM Cortex-M7 addressing high-growth markets like IoT and wearables, as well as automotive and industrial applications that can leverage its performance and power efficiency.”

Samsung leaps ahead of Apple, Google in IoT race with acquisition of SmartThings